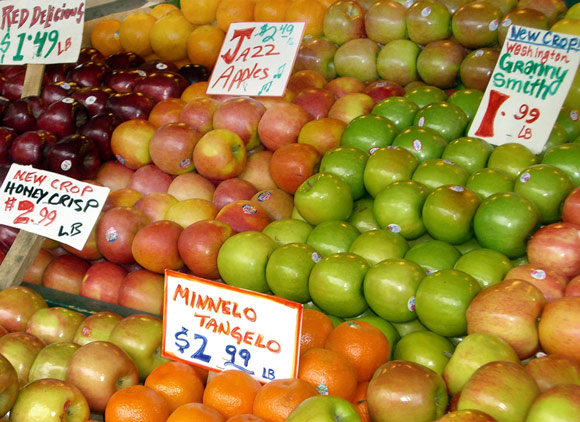 In the early 1980’s, I wrote an article for my newspaper column, Seasonal Bounty – Northwest Style,  in the Bellevue Journal American,  in which I bemoaned the loss of the old-fashioned apple varieties.

At the end of the 19th century, 8,000 growing varieties of apples were listed by the United States Department Of Agriculture. In 1982, in Washington state–the largest single producer of apples in the nation–only two apples were grown in any quantity-Red Delicious and Golden Delicious. These were grown exclusively in Eastern Washington. Only occasionally would one see local Gravensteins, Jonathans, Winesaps, Rome Beauties, and Newtown Pippins. Granny Smiths were at that time imported from Australia.

By 1988, the scene had changed considerably. Commercial growers had gotten on the Granny Smith bandwagon and small forward-thinking Western Washington growers had begun to produce an increasing number of varieties, which were new to most of us.

By 1990, over 200 varieties of apples were being grown in Western Washington. In six short years, public demand resurrected a nearly extinct industry-specialty apples. Just in the nick of time as far as I’m concerned. People were actually beginning to think that they didn’t like apples anymore. And who could blame them? A Red Delicious apple has a fabulous texture, yes, but taste? And the Golden Delicious is only a little better in the taste department, while the texture is more fragile and frequently ruined by exposure to room temperatures at the grocery store.

So, praise the heavens, by 2008 (when I wrote this article), it was possible to find close to a hundred varieties of apples, maybe more, in local markets, farms, and roadside stands. Plus, some varieties of Northwest apples start arriving in local markets as early as late July. 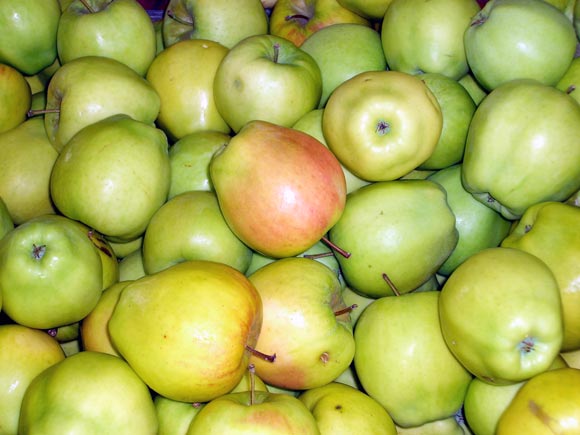 One of the most prodigious producers of Northwest apples is Kiyokawa Family Orchards in Parkdale, Oregon, about 18 miles beyond Hood River. What a marvelous thing it is to see so many apple varieties in one location! I know of no other place where you can see and sample so many unique and difficult to find varieties. If you can’t make the drive to Parkdale, however, Kiyokawa Family Orchards also sells apples and pears at nine farmers markets in Portland, Oregon and surrounding areas. Check out the details on their website, which is linked above.

Long ago, I got a clear example of how important the variety of an apple is to something as simple as an apple pie. While visiting my Dad on his farm in Cathlamet, Washington, an elderly neighbor came over with a just-baked apple pie, still warm from the oven. It was the most magnificent pie I have ever tasted. For years I tried to duplicate this gracious woman’s prize apple pie. More cinnamon I thought, maybe a little cardamom, perhaps a squeeze of lemon juice. Just why did her apple pie taste so much better than mine? Much later, on another visit, I came home with a bag of mottled looking apples from one of the old trees dotting that countryside. I almost threw them away, they looked so scruffy.

I’m sure you’ve guessed by now that the resulting apple pie had just that elusive taste I had tried to achieve with various spices and “tricks.” No, there is no substitute for an apple with a full, perfumed taste and a nice balance of acidity.  You can’t bake a sublime apple pie without sublime apples. It’s that simple.

In Western Washington, noncommercial apples almost always look mottled because of the rain, but I never pass by an abandoned roadside tree now without tasting one of its offerings. The old saying, “You can’t judge a book by its cover,” goes for apples as well. 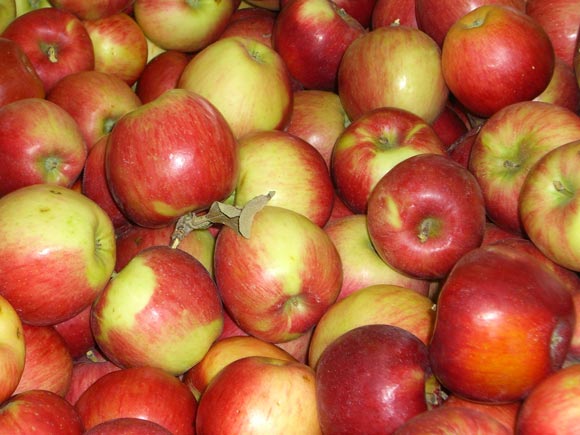 Although many apples are now available year-round through the use of cold storage and controlled atmosphere storage, they are still at their premium when purchased and eaten in season. Apples should feel very firm to the touch and be free of surface blemishes and bruises. Pretty apples are, however, not always the tastiest apples. In our Northwest climate, russeting is common on apples and does not affect their quality in any way. Look for unique apple varieties at farmers markets, local markets, and roadside stands.  They are worth searching out.

Full scale harvesting begins in mid-September, although there are varieties that are ready to pick as early as mid-July (Honey Crisps), but it can take until mid-October to fill the “pipeline.” Red Delicious, Golden Delicious, Granny Smith, and Rome Beauty apples keep well in controlled atmosphere storage (CA) and are thus available in good condition longer than some other apple varieties.  However, because of advances in storage technology, numerous local apple varieties are now available in reasonably good condition into the summer months.

Apples ripen ten times as fast at 70 degrees and five times as fast at 40 degrees as they do at 32 degrees; therefore refrigeration is absolutely necessary to maintain quality. Apples should be enclosed in a plastic bag to prevent them from picking up other flavors. With good keepers like the Red Delicious, I have had remarkable results wrapping each apple in paper, boxing them and then storing in a cold garage. They keep in perfect eating condition until Spring.  Golden delicious-and most other apples-don’t perform nearly as well and should be consumed rather quickly after purchase.

Apples turn brown when cut and exposed to the air for any length of time. To prevent this from happening, they must be immersed, immediately after cutting, in acidulated water (1/4 cup lemon juice to 1 cup water). Alternatively, dip each apple slice in lemon juice or any other acidic juice (orange, lime, or pineapple).

There is very little to do to an apple other than core it and possibly remove the skin, if the recipe calls for this. For the latter, a paring knife does the job, although there’s something to be said for the ease of use of a swivel vegetable peeler. The following equivalencies are helpful.

It is true that Golden Delicious apples hold their shape well during cooking, but I can think of no other reason to recommend them for that purpose. Granny Smith apples hold their shape and have superlative flavor as well. A crisp, acidic, highly–flavored apple is what is needed for cooking purposes. Some apples break down too rapidly or to too great a degree to be used for anything other than applesauce–even though they may possess marvelous taste. The best apples for baking in pies (meaning that they hold their shape reasonably well during the 50-60 minutes of required baking time) are Bramley, Newtown Pippin, Granny Smith, Golden Delicious, Jonathan, Winesap, Jonagold, and Gravenstein, in descending order of preference.

When you want to caramelize the surface of apple slices, without overcooking the interior, remember to use clarified butter (so that it doesn’t burn), high heat, and a heavy-weight pan big enough for all of the apples to fit in one layer. A light dusting of sugar on the apples helps the caramelization process considerably. Don’t turn and move the apples too much or they will steam rather than brown. Don’t attempt this with slices less than 1/2-inch thick, or you will have a mush rather than crispy, browned apples.