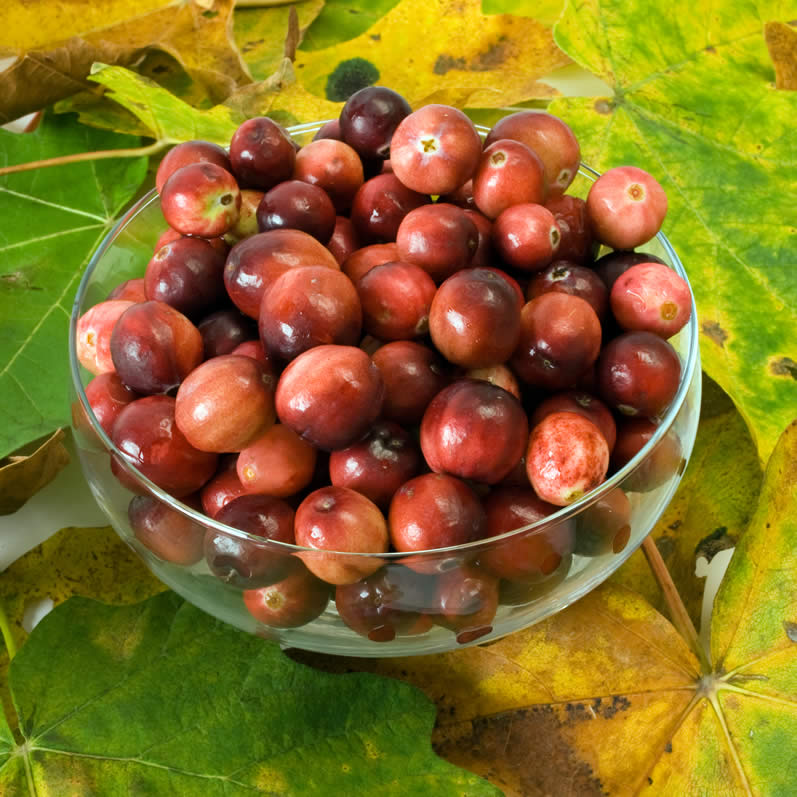 The inestimable cranberry (specifically genus Vaccinium Macrocarpon) enjoys the distinction of being one of only three native American fruits—the others being the Concord grape and the blueberry.With its high vitamin C concentration, the berry not only saved early settlers fromscurvy but also added considerable interest to their otherwise meager diets. Cranberries are commercially cultivated in only five regions today; southeastern Massachusetts, central and northern Wisconsin, southern New Jersey, southwestern British Columbia and coastal Washington and Oregon. Washington and Oregon rank fourth and fifth respectively in commercial production levels.

The soil requirements for growing cranberries are rather specific; sandy, acidic soil with plenty of fresh water. Peat is also desirable because of its capacity to retain water.So coastline bogs are usually where cranberries, with their impenetrable thatch of ground-hugging vines, are seen, although it is possible to grow them further inland given the right soil and plenty of water.

Times have been so good for cranberry growers over the last couple of decades that the berry has been nicknamed Red Gold to indicate its profit-making potential. The industry has not always been so lucrative. It takes between five and seven years to realize a full-size crop of cranberries from newly planted acreage. Land usually has to be drained of water, leveled, and covered with a few inches of sand before planting can even begin. There was also the problem ofspringtime killer frosts in the early days of commercial production, which could destroy emerging blossoms (and the entire crop in the process). In the mid-1920’s, a Washington grower by the name of Jim Crowley, developed an automatic sprinkler that is activated as temperatures drop to freezing levels. A sheath of ice on the vines protects the buds from damage. (Interestingly enough, water radiates heat in the process of freezing.) This system is now used nationwide.

A cranberryharvest is a fascinating sight. Most cranberry acreage is wet harvested; the bogs are first flooded with water, and then special machinery is utilized to break the berries from the plant so that they will float to the top of the water where they can be corralled and scooped out. The bog is a crimson sea of bobbing berries.

Because much of the crop harvested this way are slightly bruised, wet-picked berries are destined for processed market.Only ten percent of cranberry crop is gathered by the more expensive dry-pick method. Jules Furford, a grower in the Northwest, is credited with the development of the innovative Furford Picker, which mechanically dry-picks and prunes the bushes in one operation. these carefully handled—and of course more expensive– berries account for all those sold to the fresh market.

The harvest generally begins during the first week of October and continues through the first half of November. Because of their waxy skins, fresh cranberries keep remarkably well and are usually available in the market fromOctober through December.For longer availability, buy several extra packages and freeze them.

Cranberries will keep in the refrigerator for about a month. Frozen they will keep for about a year. Leave them in their original plastic bag.

Pick over your berries carefully and discard dark, soft or mashed specimens. Rinse them under cold running water and drain.

If using frozen cranberries, there is usually no need to thaw prior to cooking. Cooking cranberries in sugar tends to set the skins, toughening them somewhat. Although many recipes specify that the cranberries be cooked in sugar and liquid, you can sometimes rearrange a particular recipe to cook the cranberriesin water or possibly fruit juice before adding the sugar.It usually takes about four minutes to cook cranberries until just tender. Cooked longer, they will turn to a thicker, more homogenous mixture. Cranberries are rich in pectin, which is why they jell when cooked with sugar or honey.

The vivid color of cranberries can bleed into and muddy other ingredient–particularly a batter.To minimize this effect in muffins, quick breads, and pancakes, add frozen berries to the batter