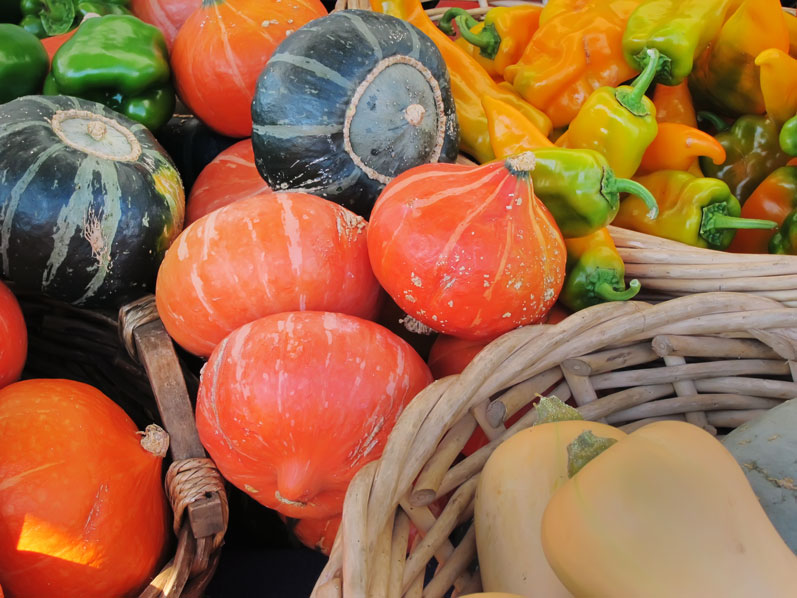 Have you ever set out to eat your way across a city, focusing on a single seasonal dish?

And here’s the thing. I could have continued this madness for another week at least. It is highly instructive to see how top notch culinary artists across a major culinary mecca treat the same basic core ingredients and menu item, in this case, winter squash and a handful of flavor complements crafted into a smooth and silky soup.

Winter squash (which includes pumpkin) goes well with a surprising number of other flavors. Check out my Winter Squash Primer for a complete list. New to me on this tasting round, however, were pears, blue cheese, rye bread, and smoked maple syrup, all wonderful partners for winter squash.

The adventure began at Sel de la Terre on our first night in Bean Town. We sat at the bar overlooking the action in the kitchen and watched as dish after gorgeous dish made it to the pass. As I looked over the menu, I was hooked immediately by Chef Louis DiBiccari’s  winter squash soup with smoked maple syrup. The soup was spectacular. In fact, this is the most memorable winter squash soup I have ever eaten–bar none. The flavor pairing was completely harmonious and magical. Also perfect was the balance between the sweetness of the squash and an unnamed acidic counterpoint. The garnishes were lovely as well, but really, the soup stood on its own merit. 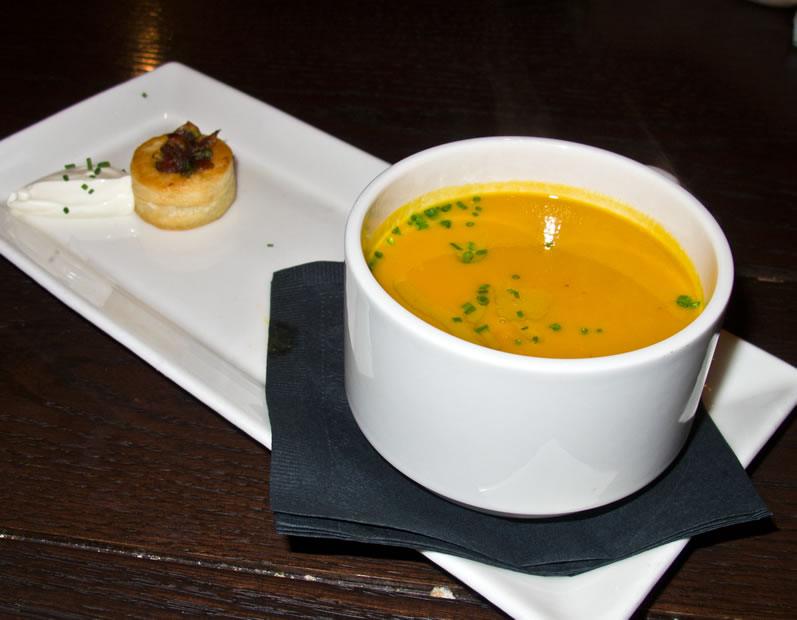 Sportello, one of Chef Barbara Lynch’s more novel restaurant concepts (with a focus on house-made pasta and counter-style seating) presented this classic example with a few interesting embellishments to keep me eating to the bottom of the bowl. The soup tasted brightly of cooked, pureed kuri squash and little else. I didn’t detect stock even. The color is a brilliant hue, as you can see, and the garnishes add visual interest. 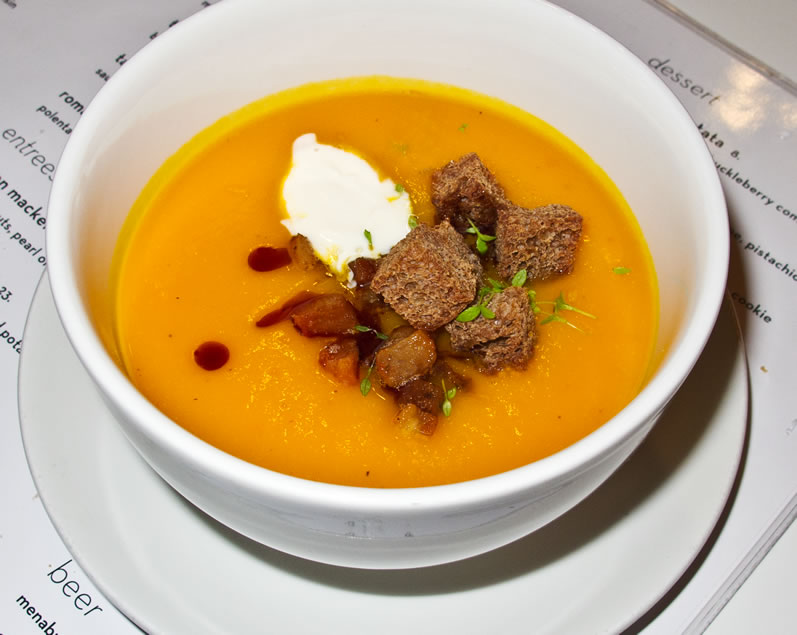 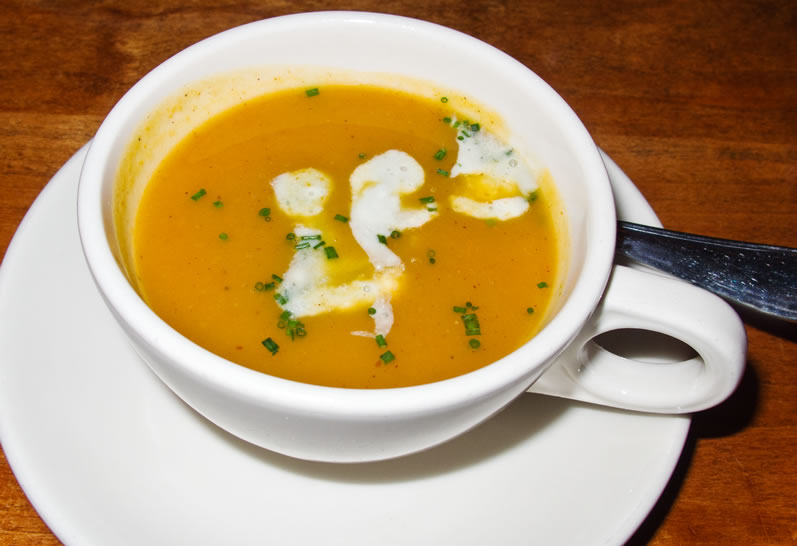 At Sorellina, Chef Jamie Mammano chose pumpkin as the key ingredient for his winter squash soup. Curry, ginger, and pumpkin are a perfect flavor pairing with the diced pears adding a welcome textural contrast. 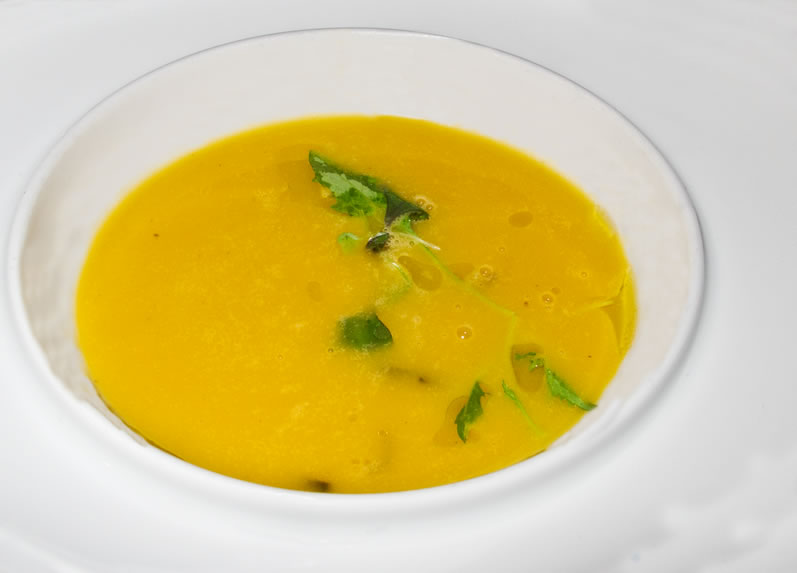 And to top off the week of tasting, Chef John Welch of North 26 incorporated an Indian spin into his full flavored red kuri squash soup. Coconut milk and chile both mellowed and enlivened the creamy soup. Matchstick shreds of fried squash added an interesting textural as well as visual, contrast. 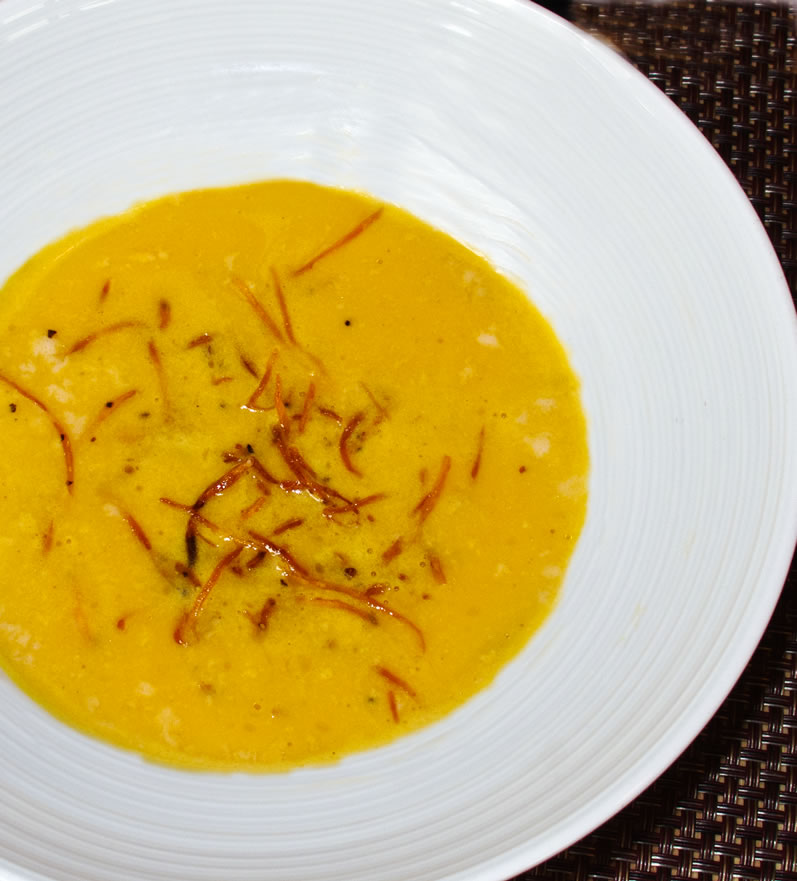 So that’s it folks–five fabulous soups in five fabulous days in one of the most exciting food cities in the country.  I’m sure I missed a few equally stellar renditions, but there’s always next year.

Check back for my own winter squash soup creation, inspired by a week of great eating in Boston: Warm Spiced Red Kuri Squash & Orange Soup with Cinnamon Harissa.