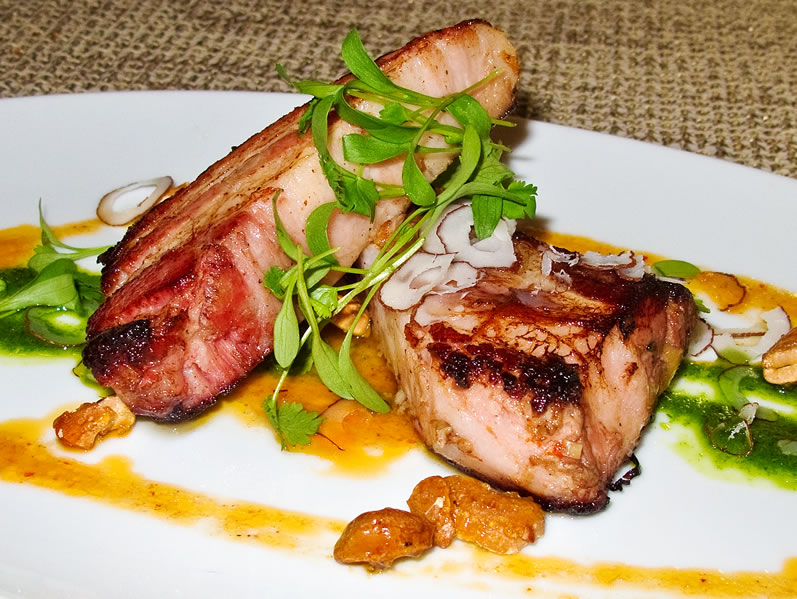 You are looking at perhaps the most delectable pork belly in the world. No, the universe. According to one of the amiable chefs behind the kitchen bar from which MauiJim and I were watching the action, it was cooked sous-vide at 145 degrees–for TWO DAYS.

You won’t, however, find this mentioned on the menu. I only suspected it after the fatty portion of the pork belly melted on my palate like warm butter. Then I asked. If I had been paying better attention, the plastic pouch from which the chef removed the portion of pork belly would have been an immediate give-away.

But I wasn’t paying attention while the chef was preparing my pork. Instead, I was completely enthralled with the gorgeous, silky, minty, and very fresh tasting English Pea & Herb Soup with Tangerine Bubbles. And yes, there was some moaning. 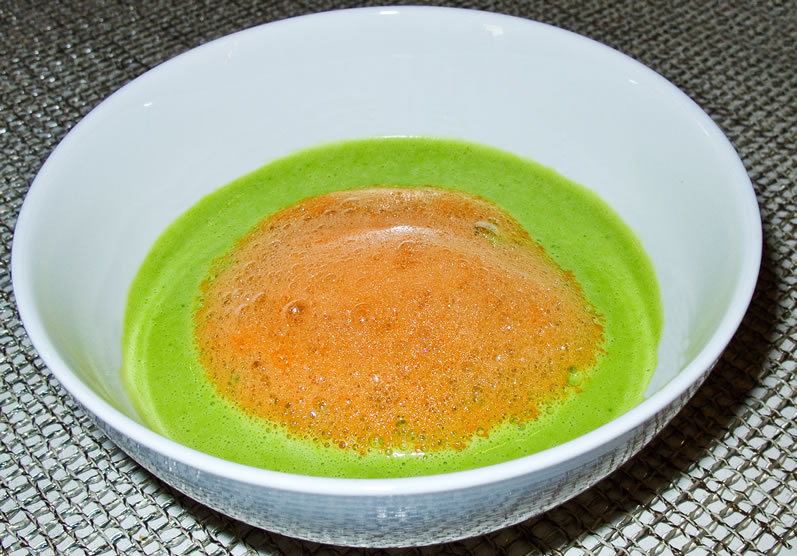 I have always felt that one can accurately assess the palate, technical ability, and culinary philosophy of a cook by tasting his or her soups. This soup was breathtaking in its simplicity, with thoughtfully balanced, bright and full flavor. It was also perfectly seasoned, something of a rarity these days. After tasting this soup, I trusted the entire menu. Indeed, I now trust anything this chef might want to serve me.

As it turns out, a lot of other folks feel the same way. The tasting menu is a big draw. For 200 bucks a head, you can book the Chef’s Table for the evening and put yourself fully under the spell of chef-owner, William Belickis. But if that sounds a bit over the top, there is also an 8 course meal for 90 bucks and a four course meal for 60 bucks.

For a more casual experience, you aren’t going to go wrong ordering off the ala carte menu either. Everything here is prepared either on a conduction burner, in a sous-vide immersion cooker, in a large wood-burning oven, or all three. Not a gas burner in sight. 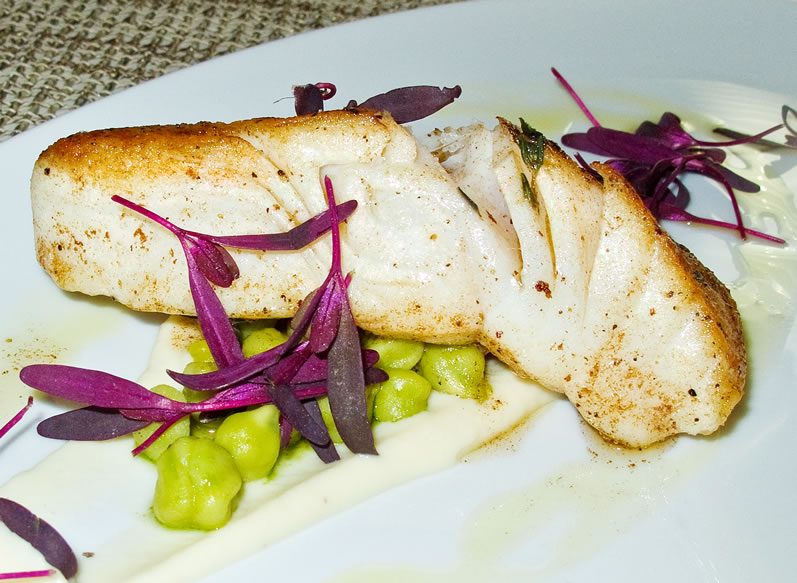 Take the Roasted Alaskan Halibut, Fresh Green Garbanzos, Parsnip Puree & Tangerine Oil for instance. We have never seen such LOVE lavished on a piece of fish. The chef started the fish in a sauté pan over a conduction burner. After a while, he checked the crust forming on the bottom and added a dollop of butter. Then he started spooning the by now browned butter over the fish again and again and again. Oh the aroma! Finally the pan with the fish was put into the oven where he carefully checked it every minute or so, then at last turned the fish over to crust the other side. It was cooked perfectly and completely infused with the flavor of the lemony brown butter. Every order of halibut got the same rapt attention. We were spellbound. MauiJim can’t stop talking about this dish. We’ll probably have to go back to Mistral next week so he can have it again. But hey, I’m not complaining.

The Arugula Salad with Fennel, Pecorino, Lemon & Fromage Blanc, which was part of three courses for $25 presented in conjunction with the Seattle Restaurant Week event, was simple and refreshing. 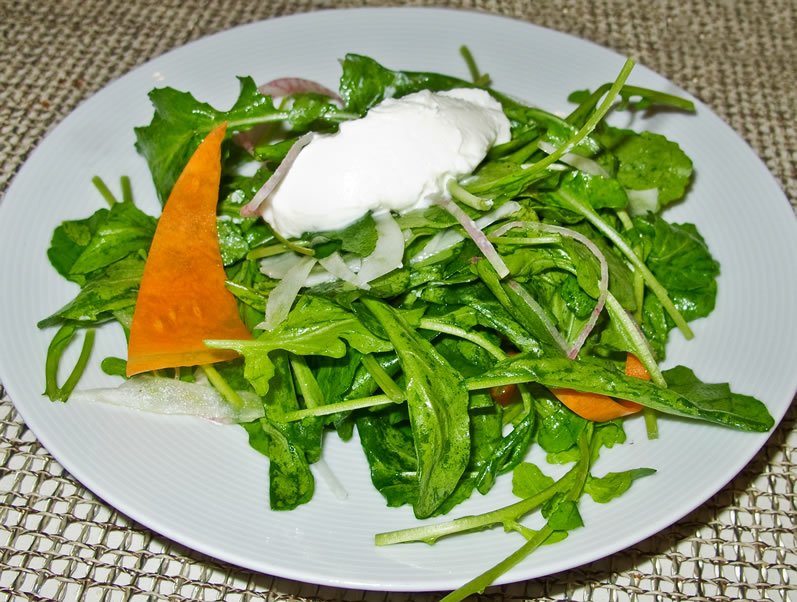 Keeping our selections on the light side, we had plenty of room left for dessert. I have an enduring love for the dense, slightly chewy, little French cakes called friands or financiers. Pastry chef, Neil Robertson, creates an inspired version with his Rhubarb Financier, Fromage Blanc Szechwan Pepper Sorbet & Rhubarb Soup.  Rhubarb is delicious but rarely elegant. This dessert proves it can be done.

And I never pass up Tres Leche Cake on a restaurant menu. Chef Robertson’s version, Lemon Tres Leche with Tuile & Fresh Strawberry Sorbet is exceptionally light, subtly sweet, and perfectly accompanied by a sorbet that tastes of summer field strawberries and an exceptionally thin praline cookie. 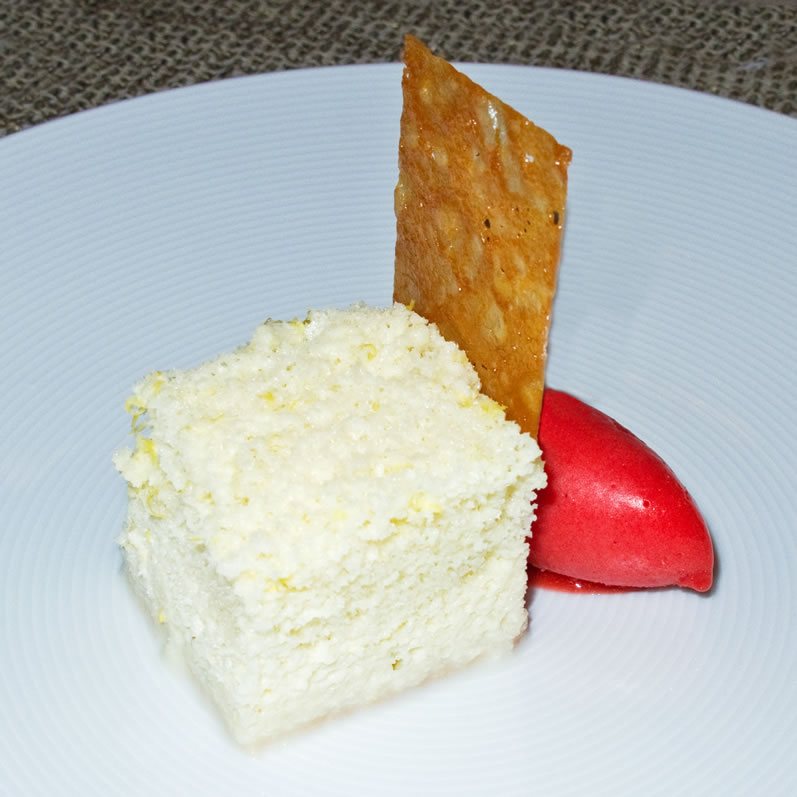 The last thing I asked the “halibut whisperer” chef was, “Does the menu change often?” Surprised, he responded with, “Oh yes, very often and with the seasons.” Perfect, because this is one Seattle restaurant that we want to return to again and again.