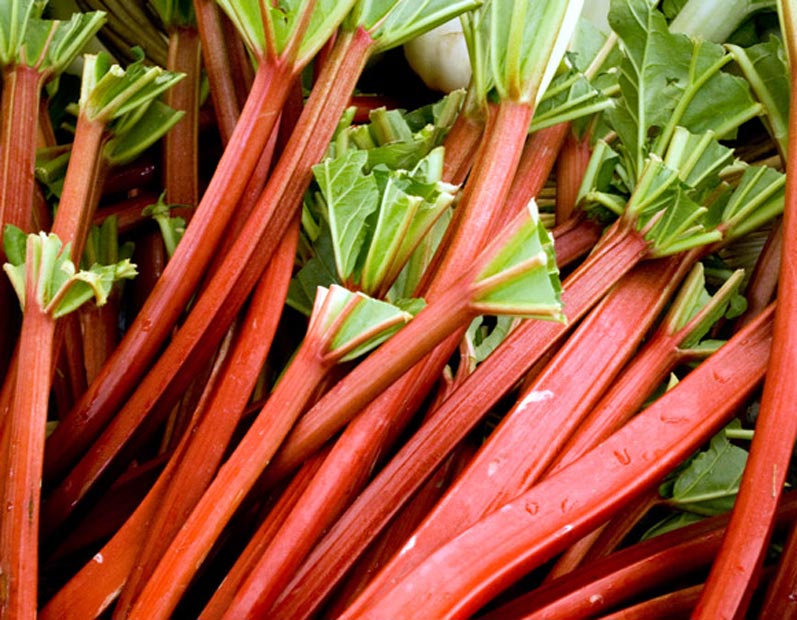 I have loved rhubarb for as long as I can remember. As kids, my brother, Daniel, and I would pilfer it from between the pickets of the deteriorating white fence that separated our yard from the neighbor’s. We thought of it as “high crime,” stealing if you will, but as I look back on our shenanigans now, I realize that no one but us gave a darn about that forgotten patch of rhubarb.

Because it was stolen, the only way we were able to eat it (without being found out) was raw and behind a prickly mass of bushes to boot. No one I knew made rhubarb pie when I was growing up, and they certainly didn’t make rhubarb mousse, rhubarb parfait, rhubarb crisp, or rhubarb-strawberry daiquiris. Those were the bad-ole-days. 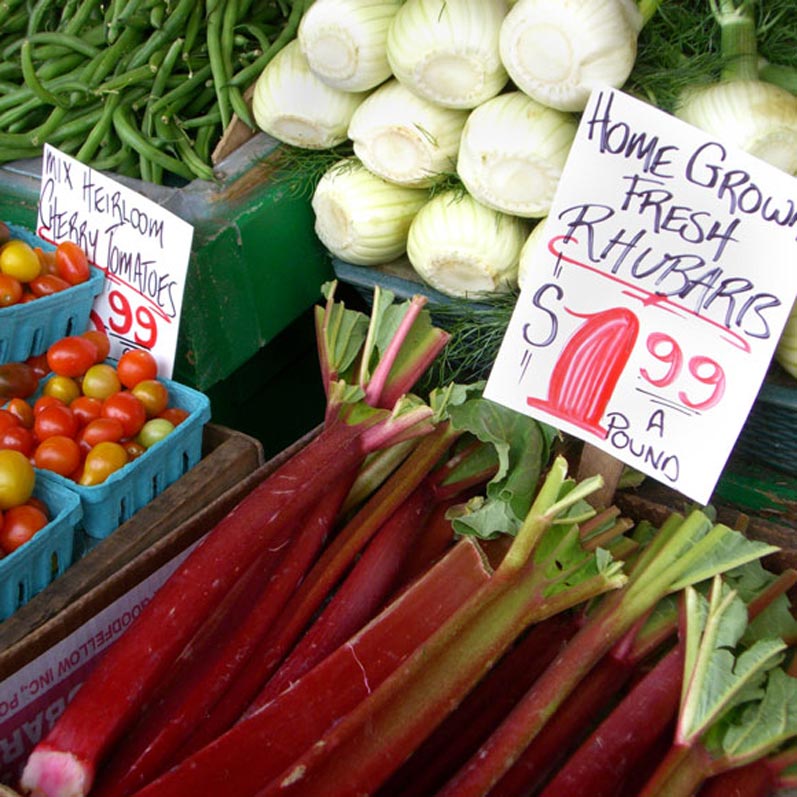 Perhaps I can arouse your local pride by telling you that Washington State produces 90% of the nation’s supply of hothouse rhubarb and over 50% of the fresh field rhubarb. Sumner, Washington is the rhubarb capitol of the U.S, for quantity but also for quality. The prized Crimson Red and Johnson Red varieties are grown only in Washington.

However, rhubarb production is on the decline, with only 2000 acres of the crimson beauty planted around the country. If demand and corresponding prices don’t increase in coming years, we may see this lovely vegetable fade into oblivion. For now though, most local farmers markets in Washington and Oregon are overflowing with fresh rhubarb. I buy an armload each week and am discovering many wonderful ways to use it, from Rhubarb-Infused Tequila (makes fabulous Rhubarb Margaritas) to Spring Rhubarb & Apple Crisp with Toasted Hazelnut Streusel (next post). I don’t want rhubarb season to end! 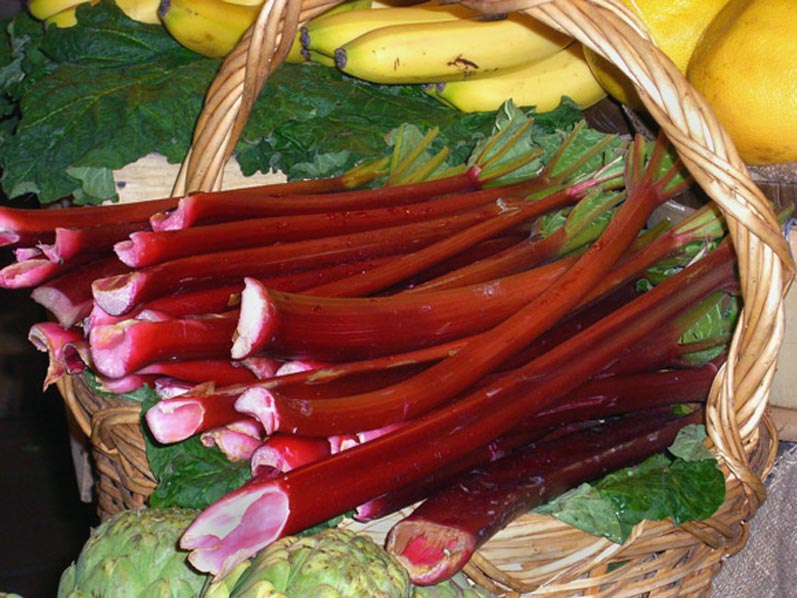 Rhubarb is one of the first fresh crops of the Northwest spring. Hothouse rhubarb begins appearing in February, while the field crop arrives in late April. Local rhubarb used to be available through June only, but availability depends on when the summer heat hits. Last year (2008) for instance, you could find fresh rhubarb in the farmers markets all the way into September.

Fresh rhubarb should be firm, crisp and tender. It will snap crisply if bent; it should not be limp or flabby. Rhubarb is at its best when young and slender, no more than 1-inch thick; by the time the stalks are green and humongous the fruit has developed a lot of coarseness and too much acidity.

Early hot-house rhubarb has smaller leaves and the stalks are lighter pink and less acidic. Later rhubarb tends toward rosy red and has quite a bit more acid. I have noticed some years that the rhubarb appears mottled and I suspect this has to do with the rain; it doesn’t seem to hurt the taste. The leaves of rhubarb are highly toxic, containing oxalic acid; these are generally removed by the growers, but if not, be sure to finish the job yourself.
Storage

Fresh rhubarb will keep, wrapped in a plastic bag, for several days in the refrigerator.

The leaves of rhubarb are highly toxic, containing oxalic acid; these are generally removed by the growers, but if not, be sure to finish the job yourself.
Rhubarb does not need to be peeled; it should never be so old and coarse as to have noticeable strings. And anyway, peeling removes most of its valuable nutrients. Just clean it and completely trim and discard the leaves, along with an inch or so of the base.


Think of rhubarb as an incredibly versatile cooking fruit; its special tartness is a perfect foil for all forms of sugar.

When you are creating your own rhubarb recipes, keep in mind that the fruit contains a good deal of liquid. Cut the rhubarb into chunks or dice and cook it, covered, over very low heat without any water at all for 10 to 20 minutes, depending on whether you want some chunkiness or a mush. This fruit disintegrates all too easily.

Another thing to consider, especially if you are developing new recipes, is that the gorgeous color you see when you buy rhubarb may pale when you cook it, and especially if you combine the cooked rhubarb with a lot of cream, egg whites, and so forth, which will also dilute the color. Rhubarb soufflé is a ghastly muddy-pink, though it tastes wonderful; rhubarb mousse is a barely there shell-pink. This frustrates me considerably.

The best bet is to use rhubarb sauce, which is brilliant-red, over and around the other ingredients. Otherwise, you must compensate with some other coloring agent, strawberries perhaps, or in a savory sauce, tomato paste, brown sauce, or even a bit of caramelized sugar. No, you may not use red food coloring; that’s cheating. J

I particularly like rhubarb with maple syrup (another spring crop, from Vermont and Canada), brown sugar, and honey. It also has a natural affinity for many of natures other fruity-spicy flavors, such as strawberry, mango, apricot, peaches, raisins, orange, lemon, grapefruit, fresh ginger, cardamom, cloves, juniper, saffron, and anise. And also for anything toasty (such as wheat germ, hazelnuts, walnuts, and oatmeal), anything creamy (such as ice cream, cheesecake, and custard), anything caramel (such as caramel, burnt sugar, and brown sugar), and cinnamon, especially cinnamon-hot (as in those little red candies that are so addictive). Add to these the floral elements of rose, lavender, and vanilla, and the herbal elements of rosemary, thyme, and bay leaf. And we can’t forget almonds, especially toasted almonds.

It is effective as an ingredient in sauces and chutneys meant to accompany “sweet” meats, such as pork, ham, and sausage, and also turkey, chicken, and yes, even lamb and game meats. It is also an efective foil for oilyu fish, such as mackeral. With all this going for it, why don’t we eat more of it?

Who’s to say; perhaps cooks just don’t know what to do with rhubarb after they’ve made the 1 or 2 obligatory pies. This I would like to remedy. Armed with this fresh primer and a bevy of soon-to-be-published recipes, your own rhubarb horizons will hopefully be expanded. Try it, you’ll like it!