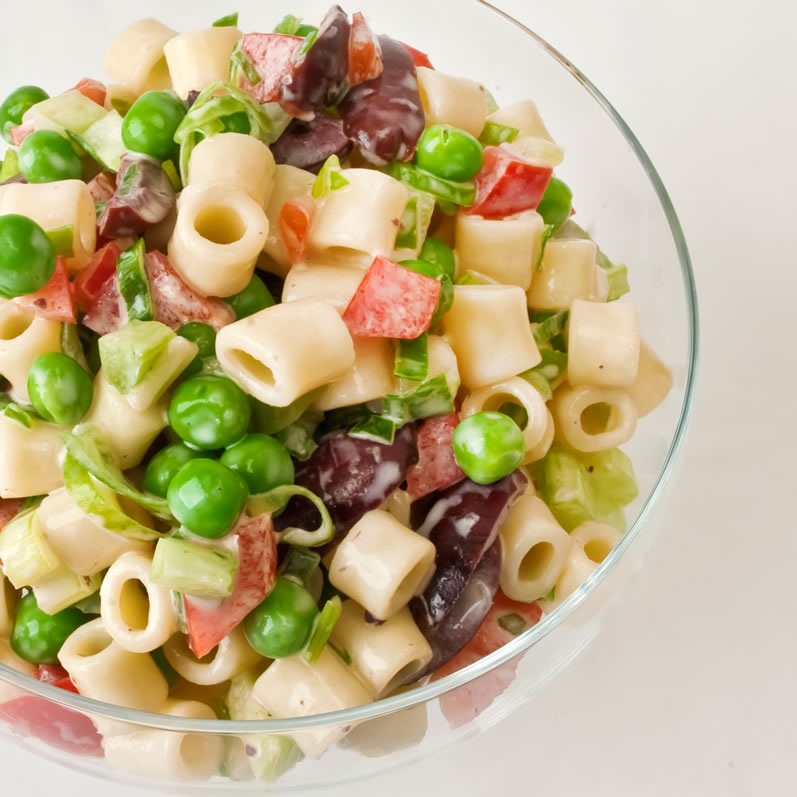 America has been having a love affair with pasta salad since at least 1920, when early recipes began appearing in American cookbooks. At first, the salads were mainly diner and deli side dishes, but eventually they achieved much higher status and became rock stars at the picnic buffet table.

To give these salads “gourmet” allure, the standard elbow macaroni was replaced with more exotic pasta shapes, such as penne, farfalle, cavatappi, fusilli, radiator, gemili, and conchiglie. And the simple mayonnaise or vinaigrette dressing took on bold new flavor profiles. 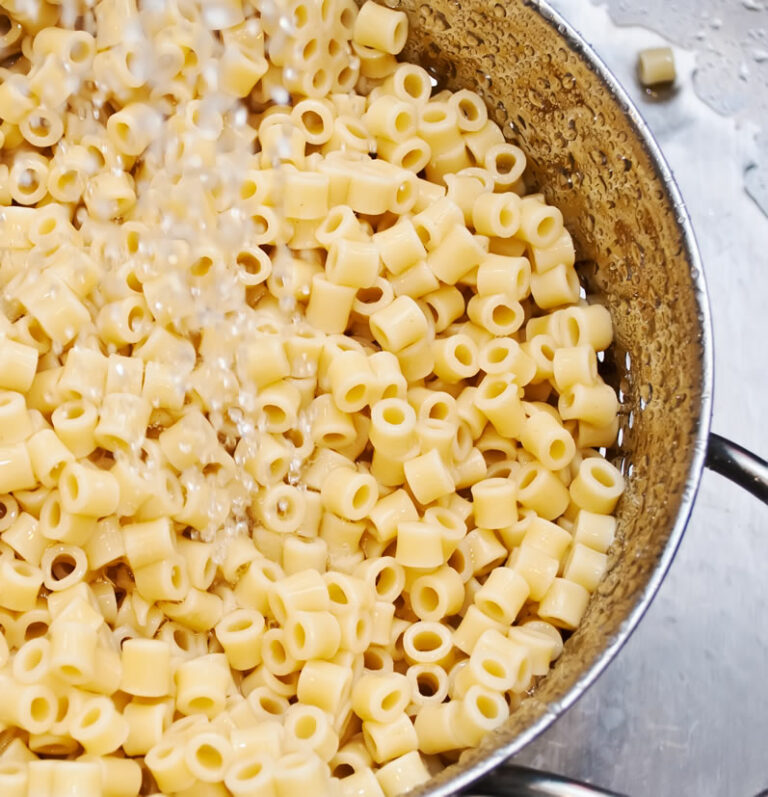 The macaroni salad offered here is based on one that played an integral part of all of our family picnics when I was a kid. Each cook (Grandma Mary or one of my aunts) would give it a slightly different spin, but it was always rich, creamy, and delicious.

Over the years, the addition of Calamata olives became my personal touch (the original salad featured canned black olives), along with red bell peppers, garlic, and buttermilk-lemon dressing for a zippy tang. Tradition doesn’t have to be boring. 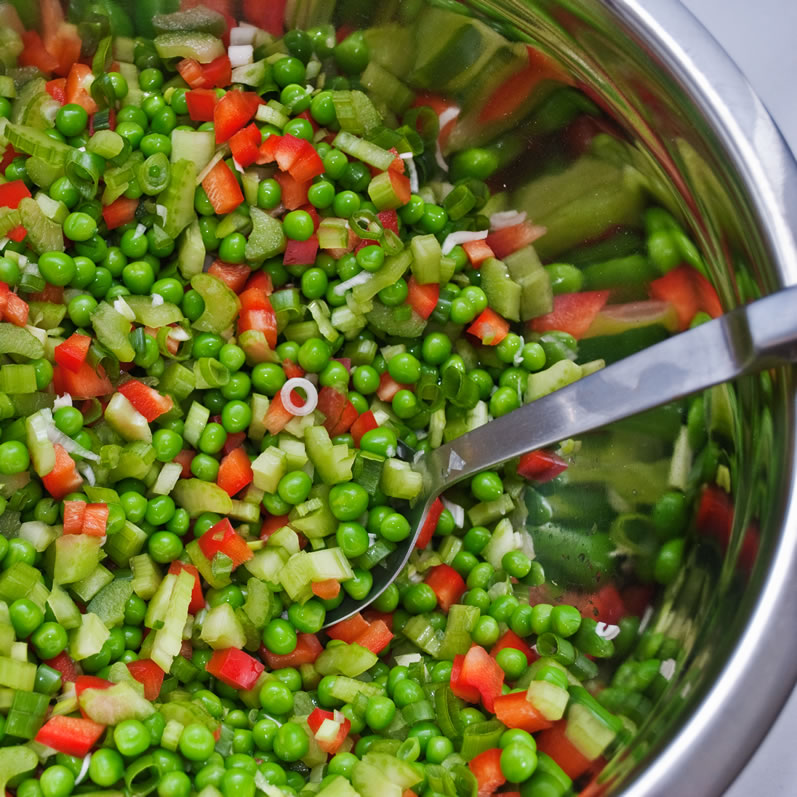 After years of experimenting with mac salads, there is one thing I know for sure: pasta absorbs seasoning in much the same way that potatoes do. In other words, you must over season today to get the perfectly seasoned salad you will eat tomorrow. When you taste this salad just after it’s made, you’ll swear it has too much acidity. I know, I know! The red wine vinegar in particular has a pungent kick at first. But don’t worry. In a few hours, every element will be in perfect, harmonious, and very tasty balance. I promise. 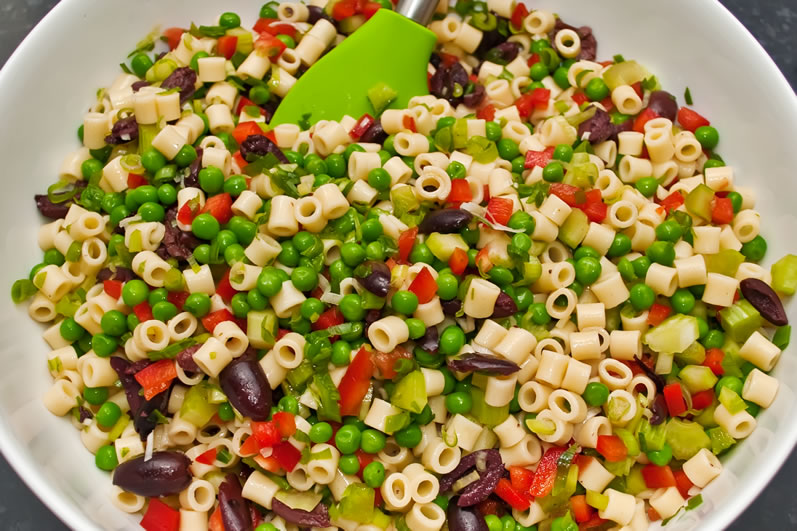 And in just the same way pasta absorbs flavor, it also absorbs liquid. You’ll notice that the dressing is perhaps a little more liquid than is typical. Again, no worries. The consistency of the salad will be perfect after chilling for a few hours.

Ingredient Note   I used to love this salad with chopped eggs, but now I prefer it without. MauiJim likes it with sweet pickles. I like it with dill pickles. Since it’s hard to remember which way I made it the last time–to be fair to one or the other of us–I now leave the pickles out altogether. No one, including me, seems to miss them. But I leave that to your discretion. 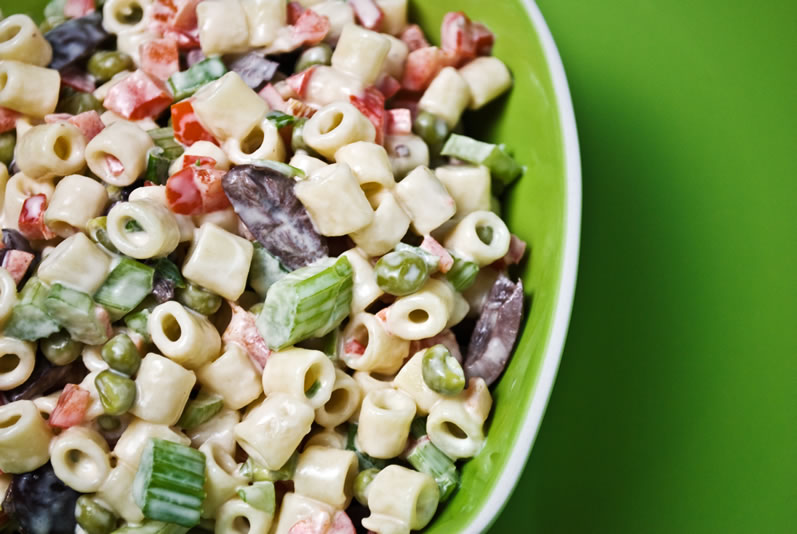 Although this is a simple salad–which I expect everyone makes in one variation or another–it is one of my most requested recipes. Friends and family can’t seem to get enough of it, and if a picnic potluck is in the works, I’m invariably corralled into bringing THAT MACARONI SALAD. You just can’t argue with tradition, even on Independence Day.

Note   If you’re making this salad a full day or more ahead, leave out the olives and fold in just before you serve the salad. They do on occasion tint the macaroni with which they come in contact an unlovely shade of purple.