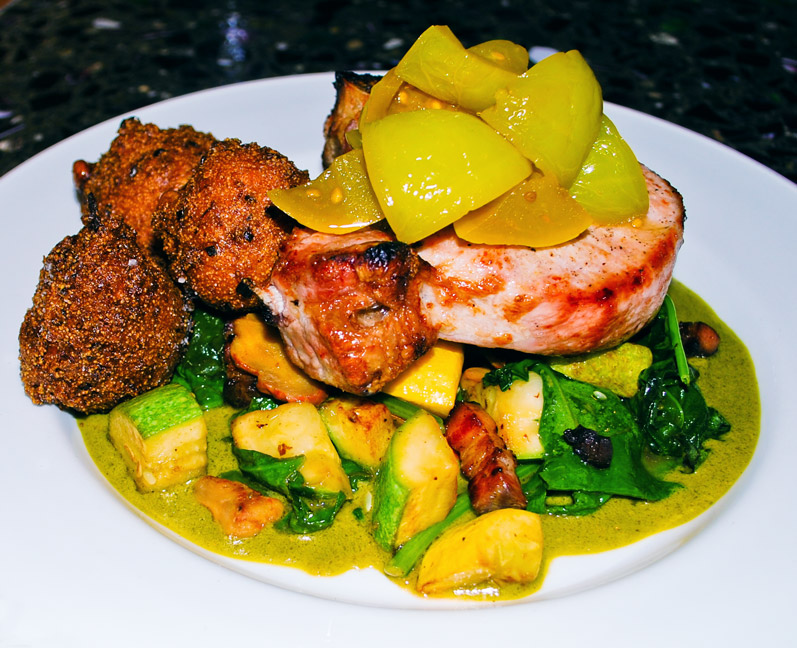 If you live in Portland, Oregon, you know that the region’s chefs take cooking with seasonal and local comestibles SERIOUSLY! And that my friends, means seriously good eats for all of us.

The Fall season is just kicking off and we’re already encountering some mighty fine restaurant dishes that take advantage of the changing palette of colors and flavors. This post is the first in a series that will feature exceptional seasonal dishes from restaurants in Washington, Oregon, Arizona, New England, and Maui (and anywhere else the wind may blow us).

This gorgeous example is from a recent dinner perched at the open kitchen bar at Wildwood in Portland’s Northwest district. We chatted with the chef as he carefully arranged late season summer squash, house-cured bacon (amazing flavor!), lobster mushrooms, and spinach in a saute pan and then deftly maneuvered the pan into the wood burning oven.

While the veggies were roasting, he coated an oversized plate with harissa sauce (a puree of brown butter, chilies, parsley, cumin, and caraway) and put the batter for three hush puppies into the deep fryer. While those were cooking, he removed the pan from the oven, tossed the veggies to wilt the spinach and began plating the dish.

The Sweet Briar Farms succulent pork chop arrived exactly on cue from the other side of the open kitchen, and was placed on top of the veggies. Then, piping hot, corn-filled hush puppies and a generous topping of house-made pickled yellow tomatoes were added.

Everything about this dish sings brightly and boldly. Each bite plays against the next in the most harmonious way–flavors, textures, colors, heat, spice–a medley of perfection.

Postscript: As noted in the Portland Food and Drink forum, Wildwood on a Roll!, “bodacious” is actually a type of corn! You can get the seeds at the Park Seed Company.