This is a luscious upside-down tart, covered with a rich glaze of spiced apple cider caramel.  Because this tart is almost delicate and not-too-sweet, it works best on its own with afternoon tea or following a meal that does not include a “wow” level of herbs, spices, or chiles. 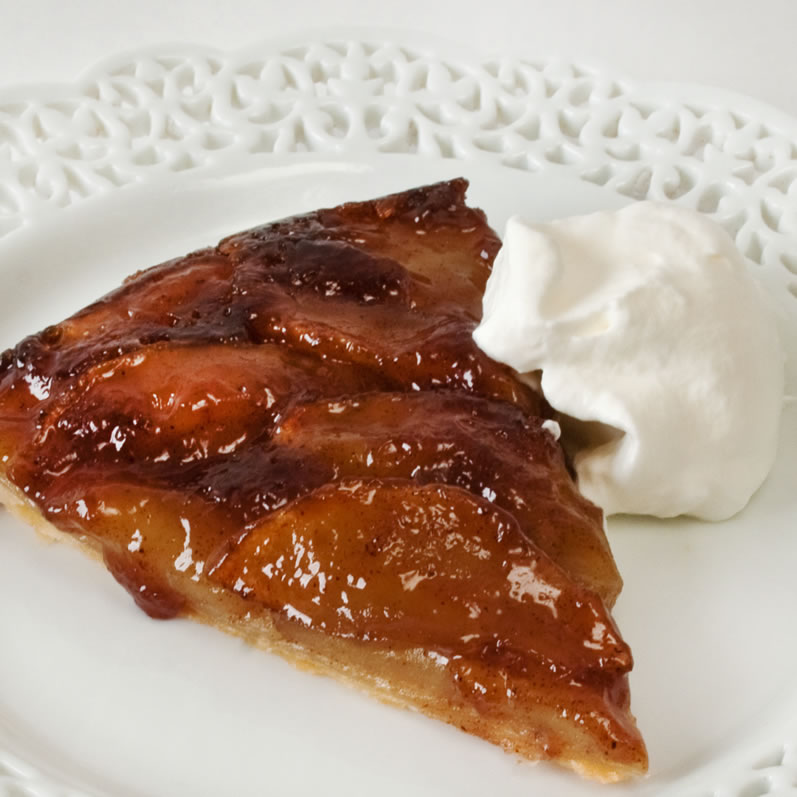 Inspiration for this tart originally came from Ready for Dessert by David Lebovitz. I bought it several years ago and began immediately to flag the pages (a sure sign that I may actually cook from a book) but then paused on page 90, at a recipe titled, Apple-Red Wine Tart. David, what a great idea! 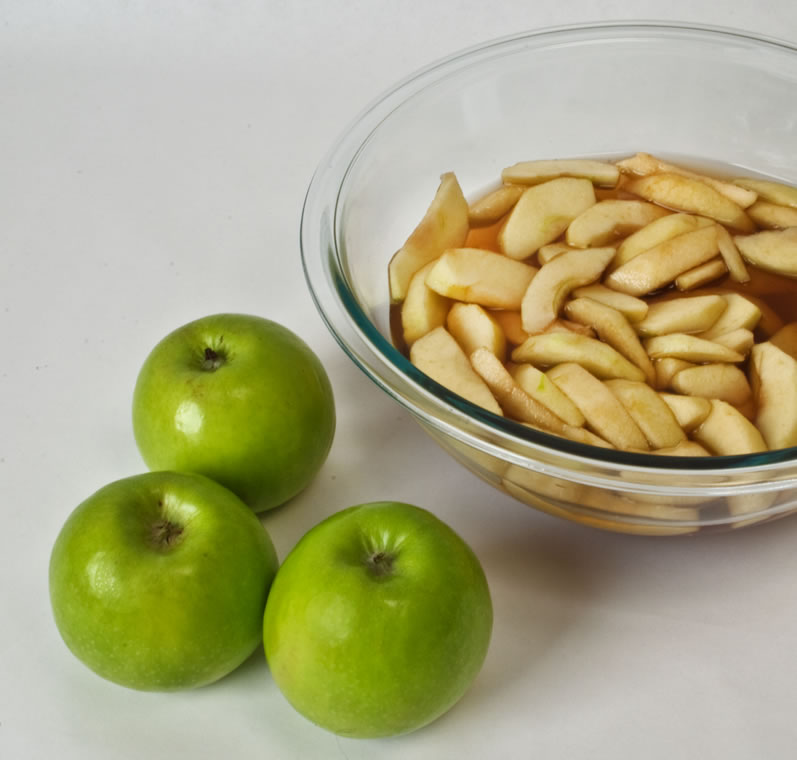 I poach pears and apples in red wine and a variety of spices nearly every fall, but it never occurred to me to expand the concept into a tart. How lovely that would that be. I actually went as far as buying a bottle of inexpensive, but hopefully decent, Merlot to try the recipe when another mental pause occurred. 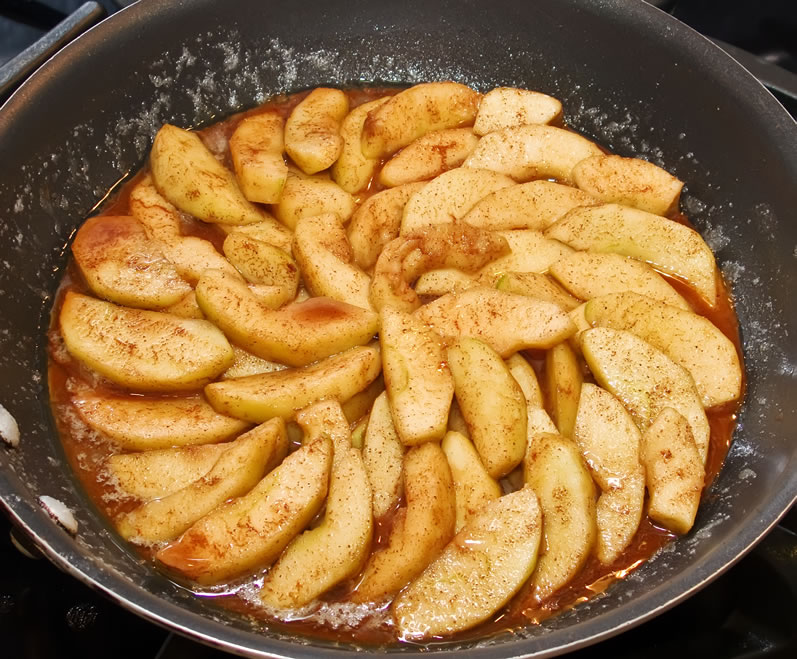 What if I macerated the apples in reduced apple cider, instead of wine? I knew from past cooking adventures, such as Spiced Apple Cider Caramel Sauce, that reducing and then caramelizing apple cider produces the most sublime nectar imaginable. I wondered if I could combine this idea with my Caramelized Pear & Anise Tart (not yet posted). And this superb tart is the result of all that wondering–and David’s inspiring new cookbook. 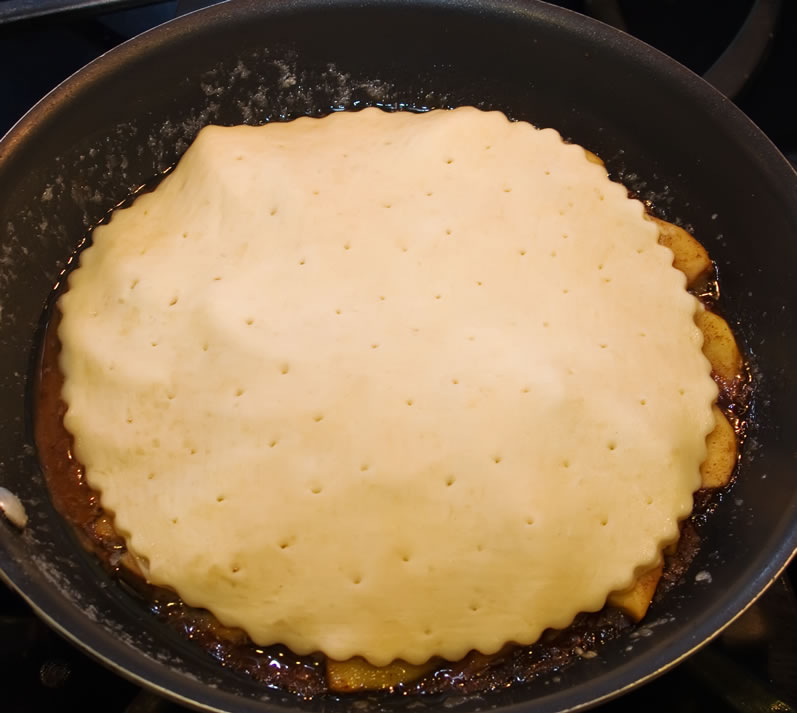 The only thing that was a bit off in my testing was the way that I sliced the apples (into 16 wedges per apple). Now, that may be customary for Tarte Tatin, but it is not the way I make the Caramelized Pear & Anise Tart. I didn’t notice the faux pas until I inverted the tart onto the serving platter and then saw that it was flat, rather than convex as I expected.

The reason for this is of course the way I cut the apples. For a more rounded finished appearance, cut the apples in quarters. The taste is the same either way, so you decide which look you prefer. 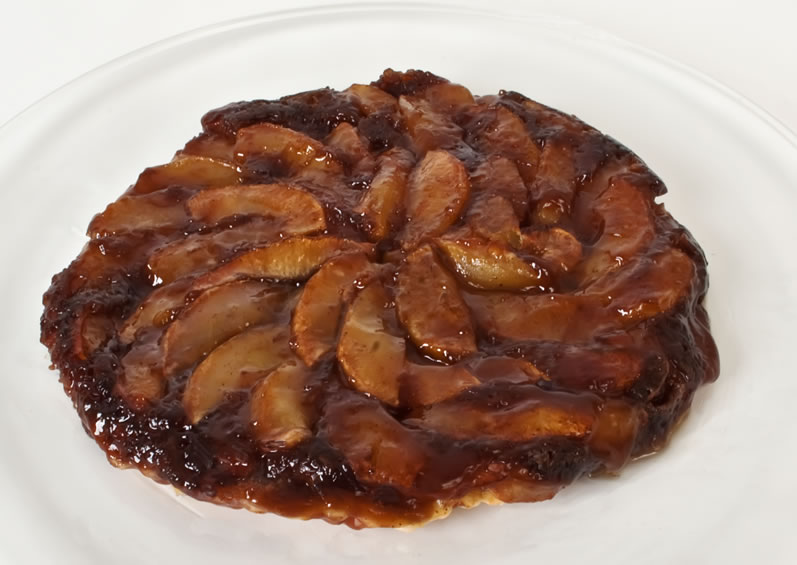 This is a luscious upside-down tart, covered with a rich glaze of spiced apple cider caramel.  Because this tart is almost delicate and not-too-sweet, it works best on its own with afternoon tea or following a meal that does not include a “wow” level of herbs, spices, or chiles.

Equipment Note The success of this dish depends a great deal on the proper pan. Ideally, you should use a heavy, shallow, sloping-sided skillet with an 8-inch bottom diameter. A non-stick, heavy-duty aluminum omelet pan of this size works well. The pan should be dark in color to facilitate the browning of the caramel and have a handle that can take a 35-minute stay in a hot oven. If you aren’t sure the handle can take the heat, wrap it with damp paper towels, and enclose tightly with foil.

Timing Note You must begin this tart a day ahead.

Ingredient Note Trader Joe’s sells an excellent apple juice, which although pasteurized, contains nothing but the juice of McIntosh apples. As unpasteurized apple cider is not available in the Northwest in September, it’s a good alternative.

8 cups fresh apple cider (or bottled pure apple juice or cider with no additives of any kind; not from concentrate)
6 fresh, tart apples; peeled, cored, and quartered (about 1¾ pound before peeling and coring; about 1 pound after peeling and coring)

Quick & Easy, Flaky, All Butter, Short-Crust Pastry, rolled out to a 9-10-inch circle (remember, the pan is larger at the top), and cut with a fluted quiche pan rim.

Serves 2-6. (Well, MauiJim and I ate the whole thing in one evening, so just sayin’.)