Every year, I create a couple of new pestos. When I encountered fava bean greens at the Portland Farmers Market in early April a couple of seasons ago, my first thought was, naturally, PESTO. The flavor of the greens is delicate, buttery and appealing—much like the beans. 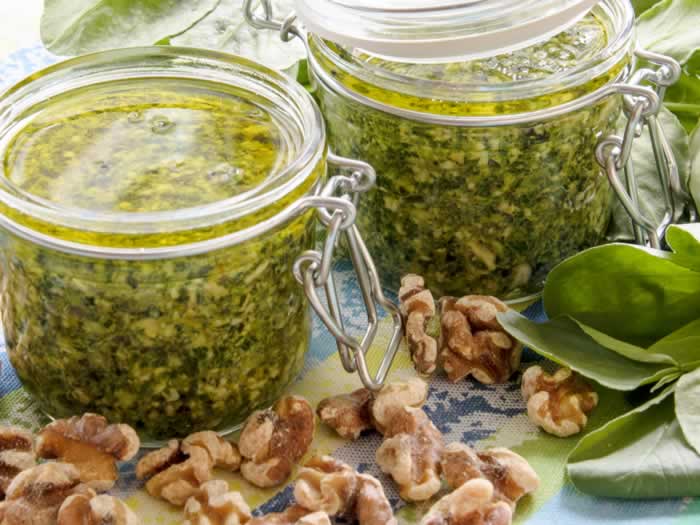 The trick with creating new pestos is to match the flavor of the key ingredient—in this case, fava beans—to other harmonious flavors. And there’s nothing like a quick dip into The Flavor Bible to research the possibilities.

However, Chef Tony Liu of the August restaurant in New York City cautions against pairing fava beans with too peppery an olive oil, as their delicate flavor would be obliterated by the more assertive oil. this is even more imperative with the more delicately flavored fava bean greens.

So armed with this information, I decided to create a rather delicate pesto that allows the flavor of the fava bean greens to shine. The flavor partners that jumped out to me for this exploration were orange, lemon, walnut, chile peppers, garlic (or garlic scapes when they hit the market), Manchego (a sheep’s milk cheese), and green onions. The result is over-the-top delicious.

So a few seasons ago, I hit the test kitchen for several days and developed a balanced, sure-fire pesto formula and five wonderful pestos: Rosemary Hazelnut Pesto, Cilantro Ginger Pesto, Herb Garden Pesto, Basil Arugula Pesto, and Basil Olive Pesto. This formula (now my standard) puts nuts in the starring role and a dry grating cheese in the supporting role. You can reverse or alter these two proportions for a slightly different effect, if you wish. You can also go light or heavy on the oil, which, along with whether you chop or puree the other ingredients, will determine the consistency of the pesto. Note that in the recipe below, the oil amount is listed as a variable between ½ and 1 cup. 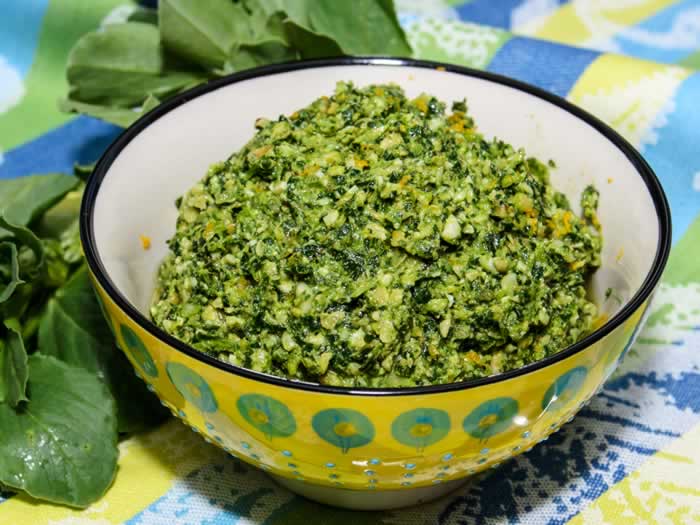 A Note on Olive Oil and Cold-Emulsified Sauces

Before you run to the kitchen to whip up a pesto, let’s consider what oil to use. Cold-pressed, extra virgin olive oil is the traditional choice. That’s what I always used–until a recent round of testing produced a particularly bitter sorrel pesto. I tasted the oil, thinking perhaps it had gone rancid. Nope, fresh and fragrant, with no bitter after taste. So I tasted the sorrel. Again, fresh and very lemony, with no bitterness. Then I noshed on a few toasted hazelnuts. Delish. There was simply nothing in the pesto to account for the bitterness. Perplexed, I searched the web to see if anyone had noticed this mysterious phenomenon. Bingo! The issue was explored in the March/April 2009 issue of Cook’s Illustrated Magazine.

As it turns out, extra-virgin olive oil contains bitter tasting polyphenols, which don’t usually assault your taste buds because they are coated with fatty acids. The fatty acids hold the polyphenols in check. Extreme agitation, as with a processor or blender, releases the full bitterness of the polyphenols. The magazine claims that agitation is only a problem when mixing a mayonnaise or vinaigrette, because with pesto, the other ingredients buffer the reaction. In my recent tests, however, the polyphenols wreaked havoc with the pesto, lending a sharply bitter aftertaste. From now on, for pesto, I will use either a light olive oil or a flavorless vegetable oil. Lesson learned. 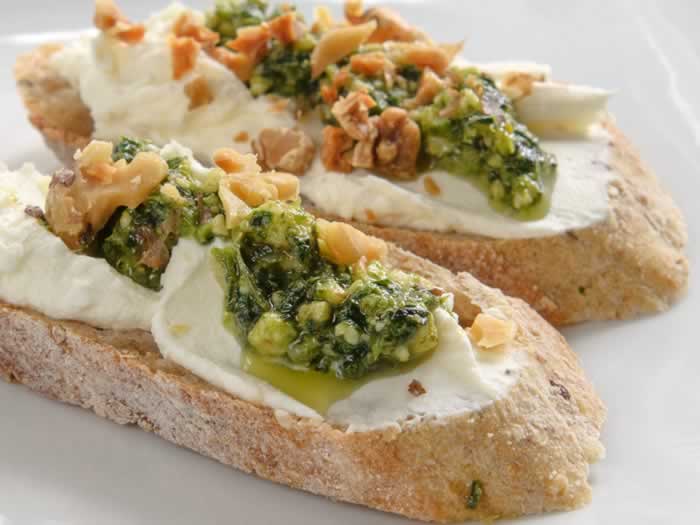 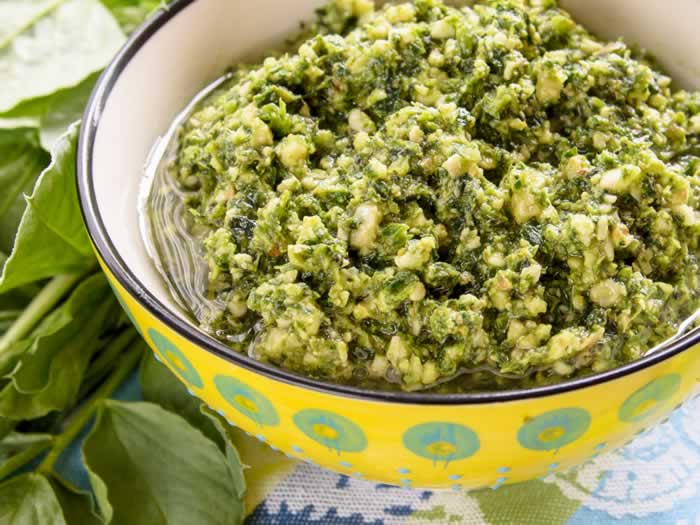