Is there anything finer in the world of vegetable cookery than a properly made Potato Gratin? Not in my book. 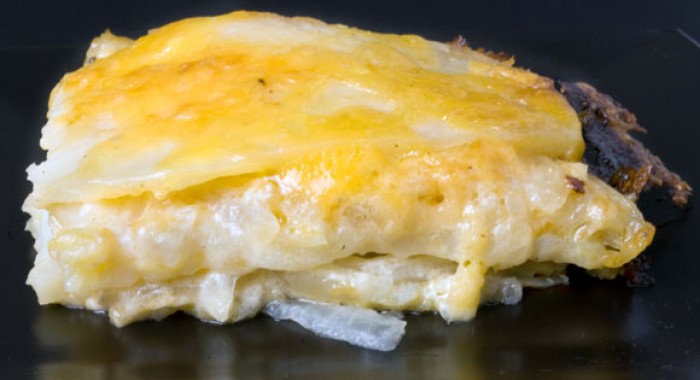 Actually, there are three basic types: one is made with heavy cream (Gratin Jurassien), one with half-and-half or milk (Gratin Dauphinois), and one with chicken or beef stock (Gratin Savoyard). 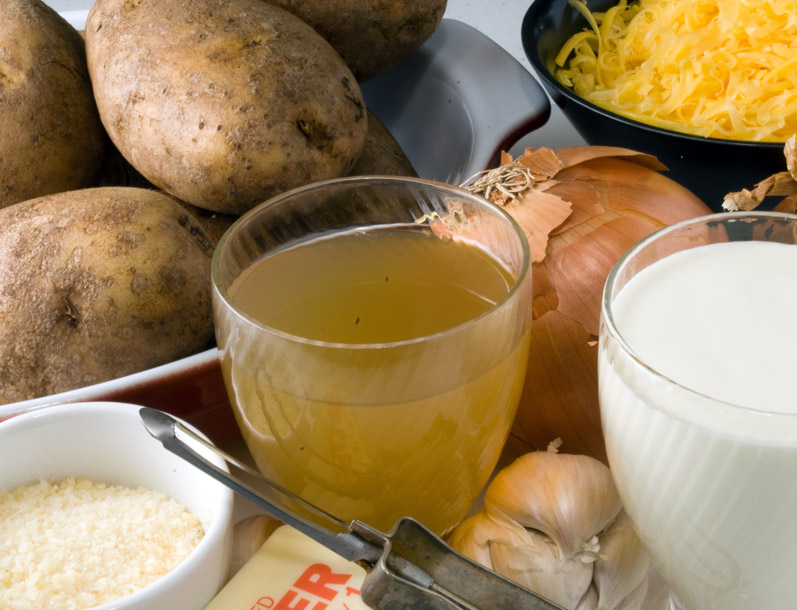 Although the methodology for all three is basically simple, there is a complicating factor that needs consideration. Potatoes are surprisingly acidic and have a definite tendency to curdle milk, half-and-half, and even, but to a lesser degree, heavy cream. (Check out the lively forum discussion on ChowHound titled, Argh, I Hate You Potatoes Au Gratin, if you think this is a slam-dunk dish.)

To minimize this possibility, potato slices can be neutralized with a preliminary blanching of 10 minutes in simmering milk. Because the potatoes are then partially cooked, the liquid requirement for the gratin decreases by about 1/3. 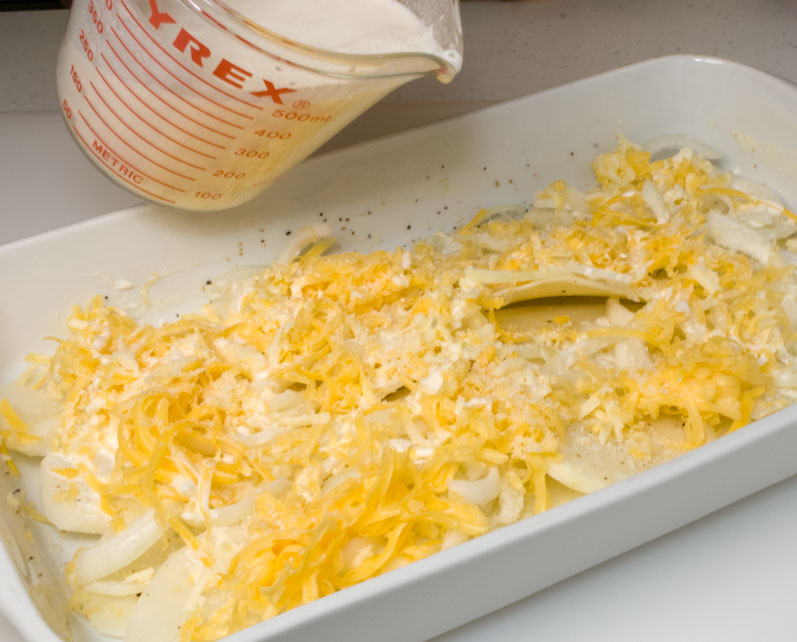 Another way to control this undesirable side-effect is to regulate the oven heat so that the gratin is never actually boiling, while also monitoring the length of time the dish is in the oven, so that overcooking does not occur (which does in itself have a negative textural effect on milk or half-and-half).

Yet another trick is to use 1 tablespoon flour per cup of liquid, which also discourages curdling.

Now my own preference is to use ½ heavy cream (which is more stable than either half and half or milk), ½ chicken stock, and a small amount of flour for a gratin that is both wonderfully creamy and flavorful?but without the heavy calories of an all-cream gratin.

On another front, the cheese you use in a gratin will itself curdle (separate and become gummy and chewy) if it is overheated. With young cheeses, curdling is virtually guaranteed. Aged cheeses, however, give you much wider latitude. I always bake with cheeses that are aged for at least a year. This is typically specified on the wrapper. 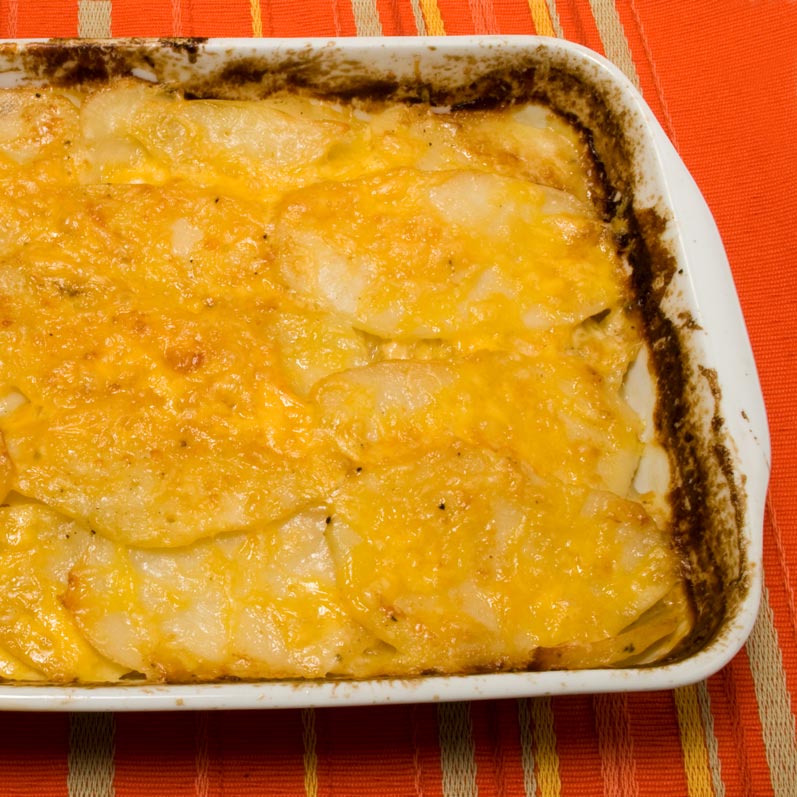 The liquid measurement here is divided between cream and chicken stock, which is my favorite combination. However, as mentioned above, all cream, all milk, or all half-and-half can be used instead.

*By baking potatoes, I mean the brown-skinned Russet Burbank potato. They cook to a lovely homogeneous mass with some separation remaining between slices. If you prefer the potato slices to retain more separateness in the gratin, use boiling potatoes, such as Red Pontiac “new” potatoes or White Rose potatoes. They will be a little sweeter tasting than Russet Burbanks.

Peel and thinly slice 1 medium-sized onion or 2 sliced leeks (white and pale green parts only) and layer it with potatoes. The natural sweetness of the onion will be enhanced with the addition of cinnamon, nutmeg, and cloves–just a tiny pinch of each added to the liquid ingredient.

Sauté ½ pound boletus, chanterelle, morel, or other edible wild mushrooms, sliced, in 1 tablespoon unsalted butter until they release their juices. Add the juices to a combination of heavy cream and chicken stock to measure 1½ cups. Layer the mushrooms with potatoes. Finely minced fresh or dried rosemary is very nice with this combination.

Up to 2 tablespoons fresh herbs–parsley, tarragon, rosemary, oregano, thyme, or chives–can be used singly or in combination with one another for this gratin. Layer them, finely minced, with the potatoes.

Alternate sliced potatoes with sliced carrots or yams, seasoning with a bit of dill weed, and proceed as in the master recipe.

A light custard sauce is the difference here.

Layer ¼-½ pound cold-smoked salmon, chopped, with parboiled potatoes. Add an egg to 1½ cups half-and-half, mix well, and pour over the gratin. Regulate the heat so that the gratin never reaches a simmer.

This gratin takes the concept to its limit, creating a complete meal in the process.

Layer with the potatoes with 1 medium-sized onion, peeled and sliced; 2 tart green apples, peeled, cored, and sliced; and ¼-½ pounds fully cooked bulk breakfast or Italian-style sausage. For the liquid, use ½ chicken stock and ½ cream, increasing the total amount to 1¾ cups. A pinch of fresh or dried thyme is perfect here.