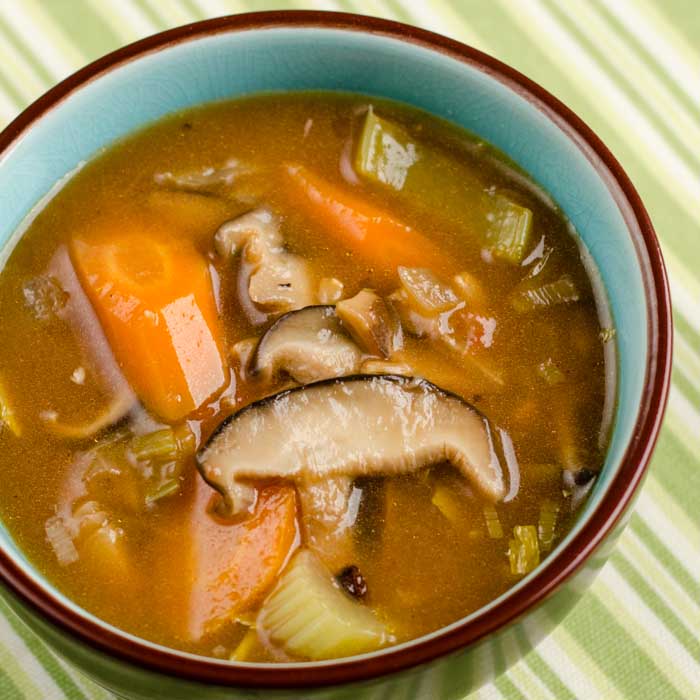 I love almost everything about Mushroom Soup, except one glaring thing—the color. The color displeases me so much that it almost deterred me from this post. How in heavens name was I going to get mouthwatering photos of a soup the color of beach sand? 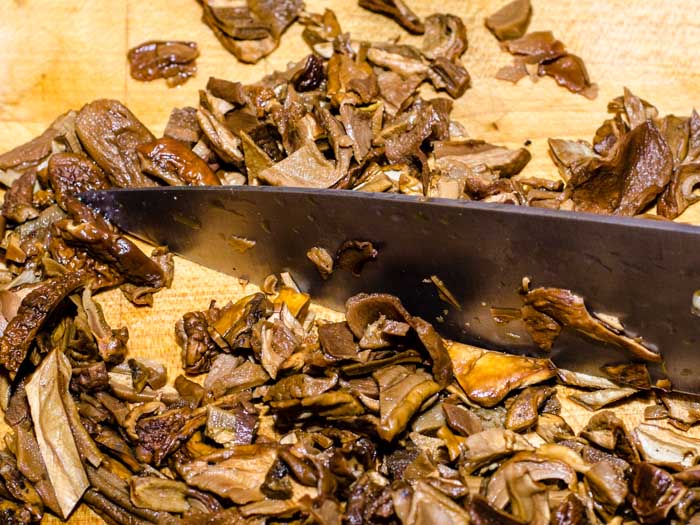 Also, I didn’t want to make just another Cream of Mushroom Soup, as good as that can be, because, well, you already have a good recipe for that, right? So I searched far and wide for inspiration. I went to Seattle, then to Connecticut, then to Mexico, and finally to London. My dedication to you knows no limits. And I expanded my Mushroom Soup horizons in the process.

Several good ideas came from Northwest food maven, Debra Daniels-Zeller of Food Connects. In her Winter Mushroom Soup with Hazelnut-Lemon Gremolata, she adds flavor depth with a dried mushroom broth, color and acidity with tomato paste, color and sweetness with yams and carrots, heat with hot chiles, and creaminess with coconut milk. Then she punches the whole thing up—POW—with a Hazelnut and Mustard Greens Gremolata. This is not your Grandmother’s Cream of Mushroom Soup. 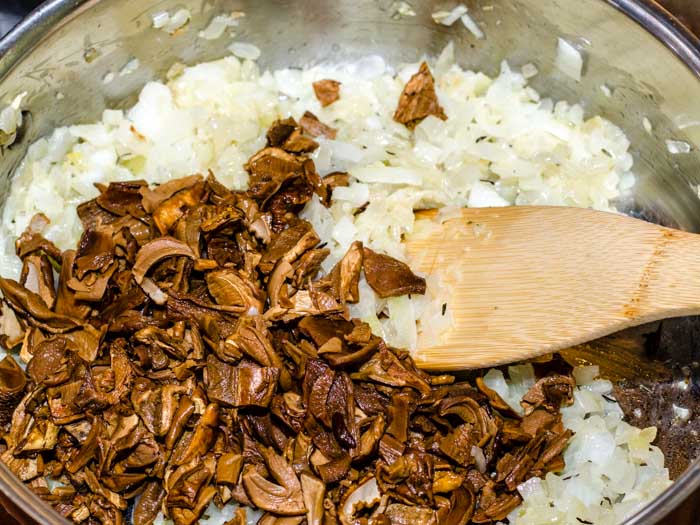 Hannah Kaminsky of Connecticut-based BitterSweet came up with the novel idea of adding salty-acidity with a copious amount of sauerkraut juice. Her Mushroom, Cabbage & Sauerkraut Soup is also chunky with mushrooms, potatoes, and cabbage. The addition of fennel seeds, caraway seeds, and celery seeds give it an old-fashioned, farmhouse-supper feel. She too uses tomato paste to enliven the color of the soup.

Carmen Andres of A Kind of Love Affair dove into Zarela’s Veracruz and emerged with a Mexican Mushroom Soup redolent with toasted dried chiles, bacon, and cilantro. 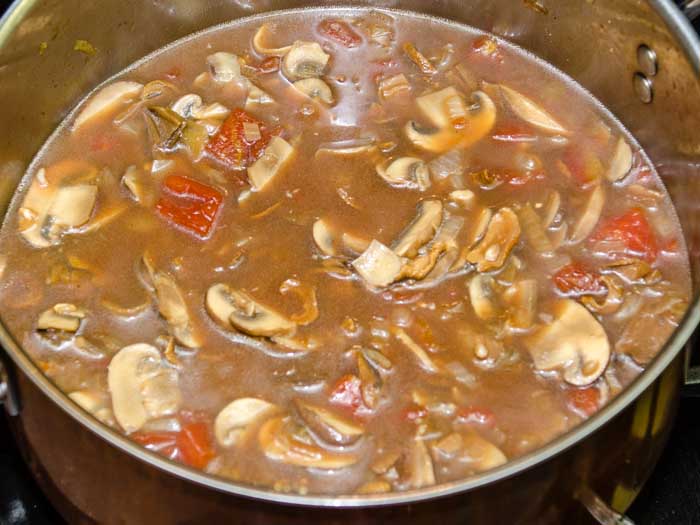 Jamie Oliver touts a rather standard Cream of Mushroom Soup, but amps the flavor considerably by including dried porcini mushrooms and the water used to hydrate them. Additional elements that lift his rendition to the holy-cow-gotta-have-it category are the use of lemon zest, lemon juice, and mascarpone. Mushroom and lemon are a pairing made in heaven, and I especially like the way he adds the lemon elements as garnishes, so that the heady aroma is released as the diner swirls them into the soup. 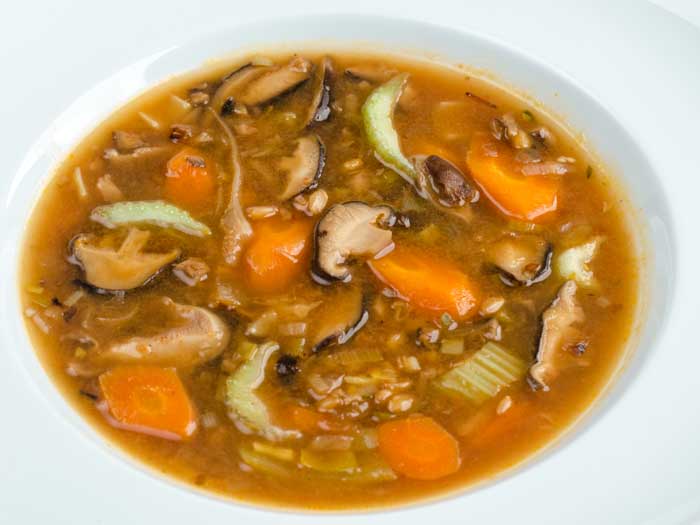 Another thing I got from the unflappable Mr. Oliver is a visually effective way to present a creamy mushroom soup. He tops his version with crostini, sautéed mushrooms, lemon zest and juice, and mascarpone. So long beach sand!

Armed with a plethora of good ideas, I grabbed a pen and sketched a profile for my soup. It would be a hearty, early spring soup with a full measure of wild mushroom flavor and a healthy dose of colorful complementary veggies, such as cabbage, broccoli raab, carrots, and celery. 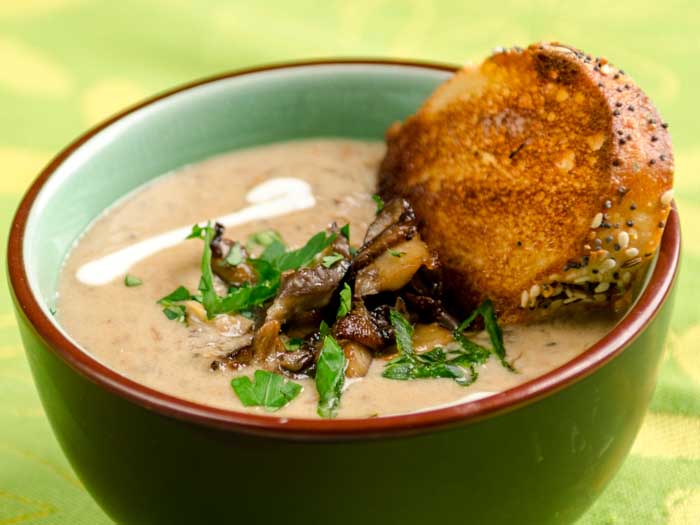 It would have a chewy grain component, perhaps barley, farro, or kamut. There would be an acidic element to punch up the earthiness of the mushrooms, perhaps lemon, tomato, or even vinegar. There would be a contrasting creamy element that remained separate until just before the soup was eaten. 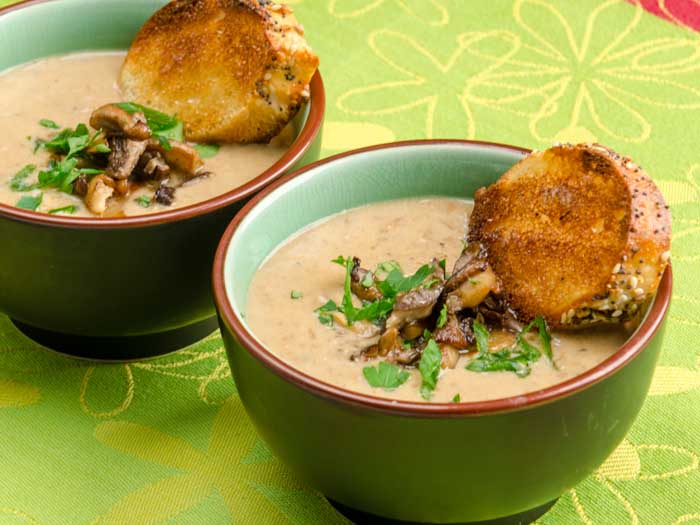 The soup base would be deeply flavored and beautifully colored with hydrated dried mushrooms and caramelized onions. There would of course be a full measure of garlic. And depending on the flavor of the soup base as it developed, there might be the optional addition of Madeira, Marsala, Sherry, or cognac. 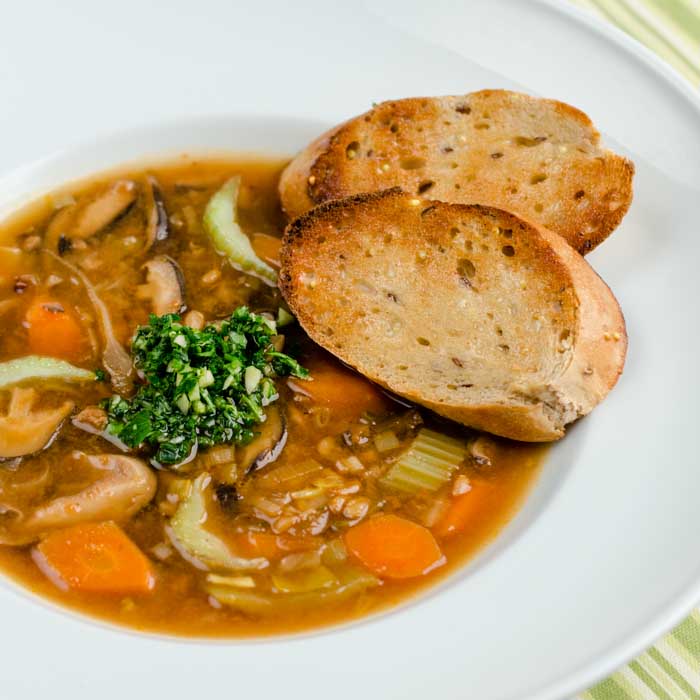 This unusual mushroom soup is packed with flavor, texture, and even color. If there’s a secret to the marvelous flavor, it’s the bright dimension that tomatoes add to the earthiness of the mushrooms. 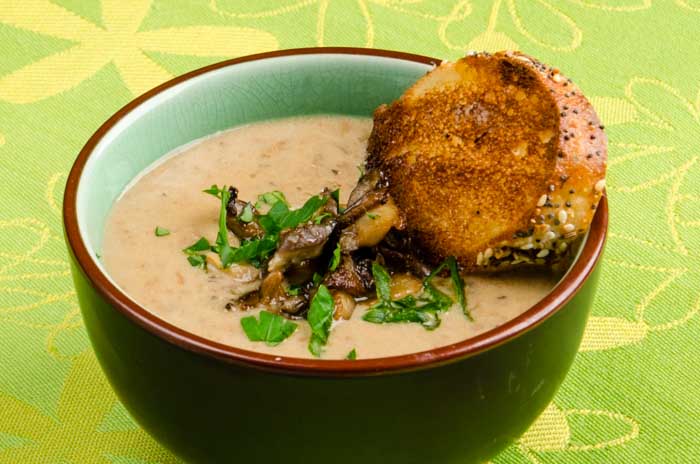 If you want to make the entire batch of soup creamy, omit the farro and cornstarch thickener from the chunky recipe.

above soup, minus the farro and cornstarch thickener if desired
2 cups cream
fine sea salt, to taste
freshly grated black pepper, to taste