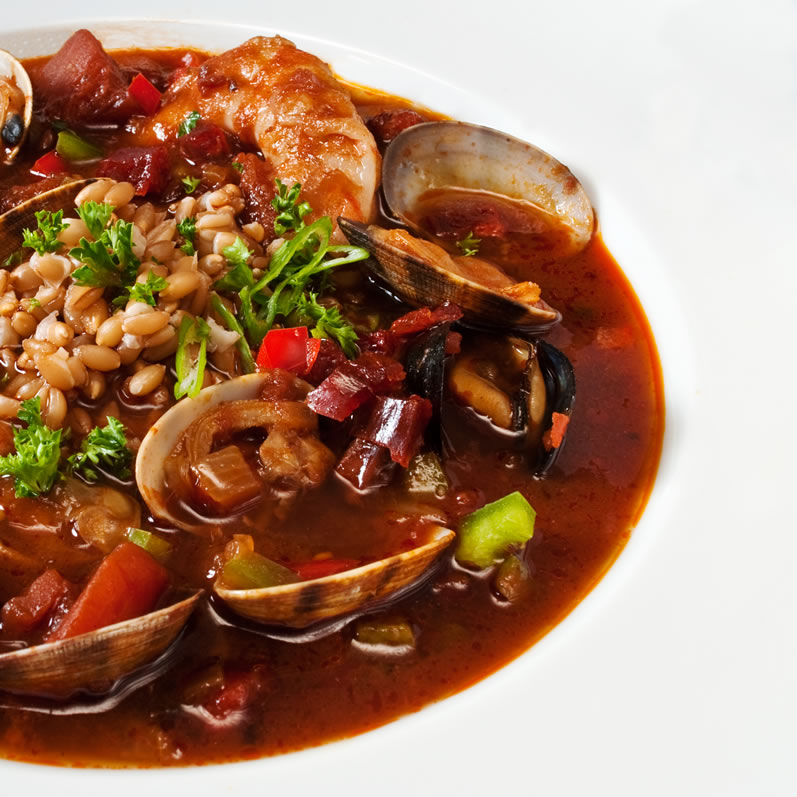 As much as I want to jump onto the spring bandwagon and create plate upon plate of bright, sprightly salads, it’s, well, much – too – COLD. So today, instead of turning to the beautiful bunches of chickweed, sunflower seed sprouts, and baby arugula that are overflowing the frig, I found myself instead spellbound by two homely little chorizo sausages. I started thinking about their savory, smoky flavor, and the next thing that popped into my mind was HOT SOUP. But not just any hot soup mind you, a Spanish soup called Zarzuela. 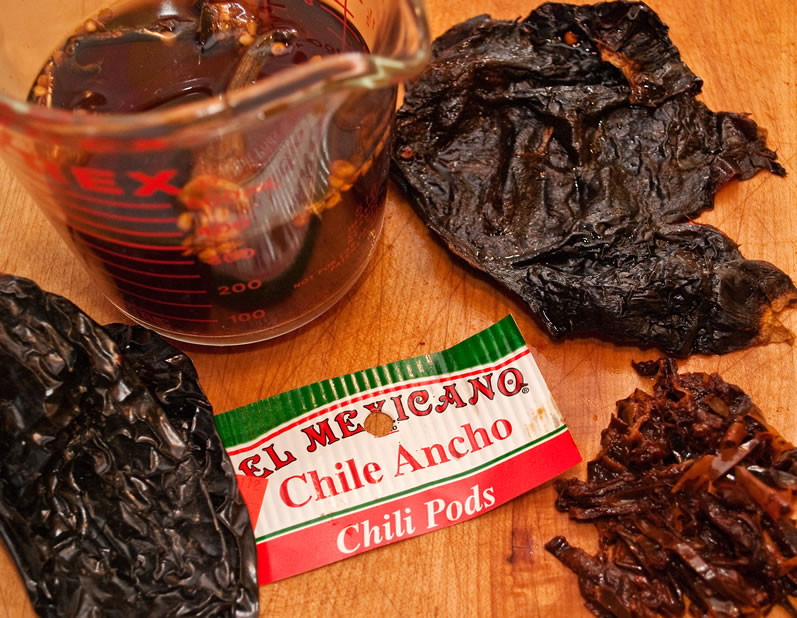 In Spain, the term zarzuela (pronounced thahr-thway-lah or sometimes zahr-zway-lah) refers to a type of light opera consisting of song, dance, and theatre. This culinary namesake, which is a seafood soup, has a full measure of drama, typically featuring halibut, mussels, shrimp, and squid—an all-star cast in an intriguing and finely tuned broth. 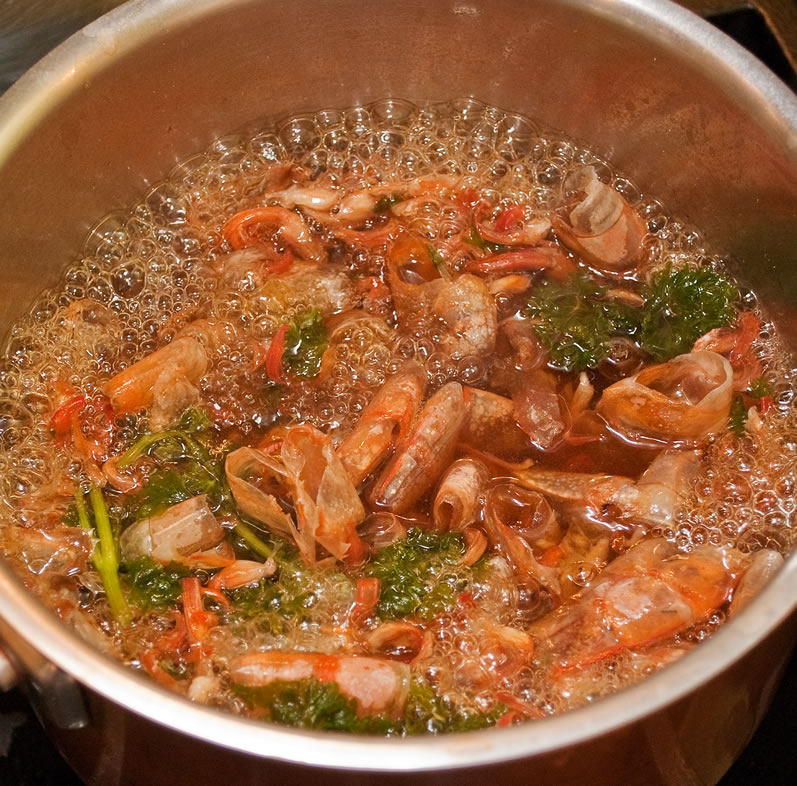 My new version takes the traditional dish down a smoky Mexican side road with the addition of ancho chile, smoked paprika, and the aforementioned smoked sausage, which together give the soup a deep, rich, complex flavor profile. The result is gutsy, satisfying, and sophisticated all at the same time. 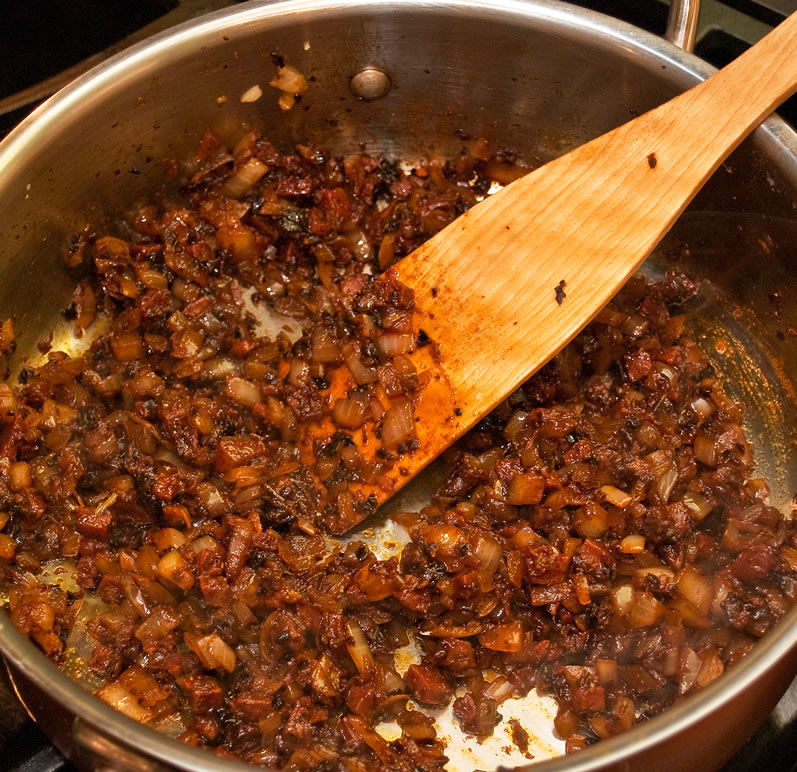 Because it looks most effective here to leave the clams and mussels in their shells, the tails on the prawns, and the shells on the crab legs if you are including them, this is a messy and very enjoyable dish to eat. Be prepared to dig in with your hands if needed. 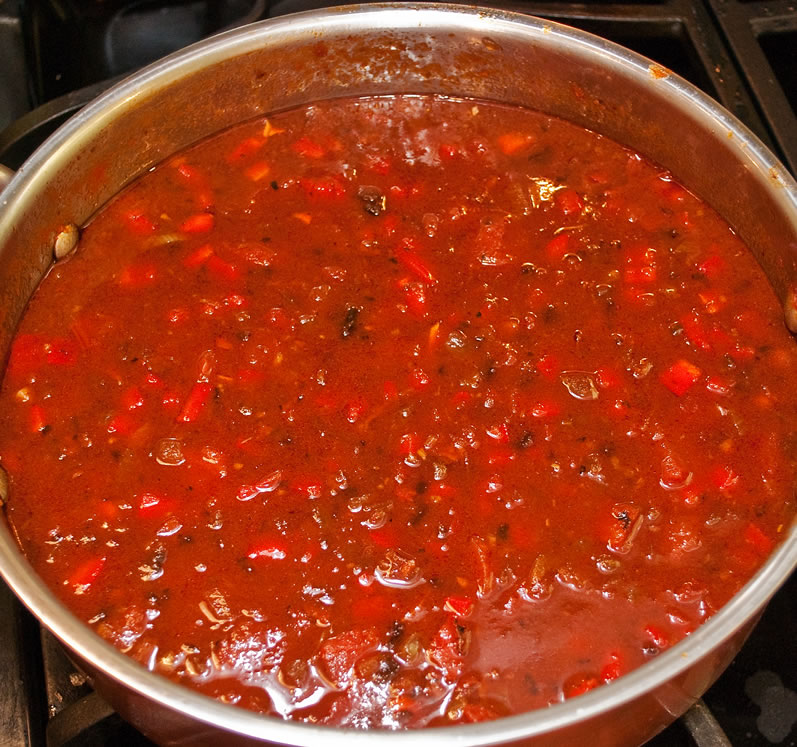 MARKET NOTE   Feel free to vary the seafood as you wish, and as market availability and freshness dictate. Although not specified, chunks of halibut are excellent here, as are cracked Dungeness crab legs.

The really important consideration is the freshness of the seafood. I bought everything I needed today at Newman’s Fish Company in Portland, Oregon. It’s a top notch operation, managed expertly by Angela Amos, daughter of legendary Northwest fishing duo, Tom and Joyce Amos. (Newman’s Fish Company is featured in the March 2010 issue of Portland Monthly.)

SERVING NOTE   To create a complete meal in a bowl, mound a cup of cooked Emmer farro (or cooked white or brown rice) into individual wide-rimmed pasta bowls, then ladle the broth and seafood around the rice. Alternatively, serve with long, diagonal slices of toasted French bread brushed with olive oil and garlic.

INGREDIENT NOTE   Farro (pronounced FAHR-oh) is an ancient hard, hulled wheat with a nutty flavor and chewy texture when cooked. It is also called spelt. American chefs are newly enamored with this old world grain, but Italians have been eating it for centuries.  Check Italian cookbooks for interesting recipes. 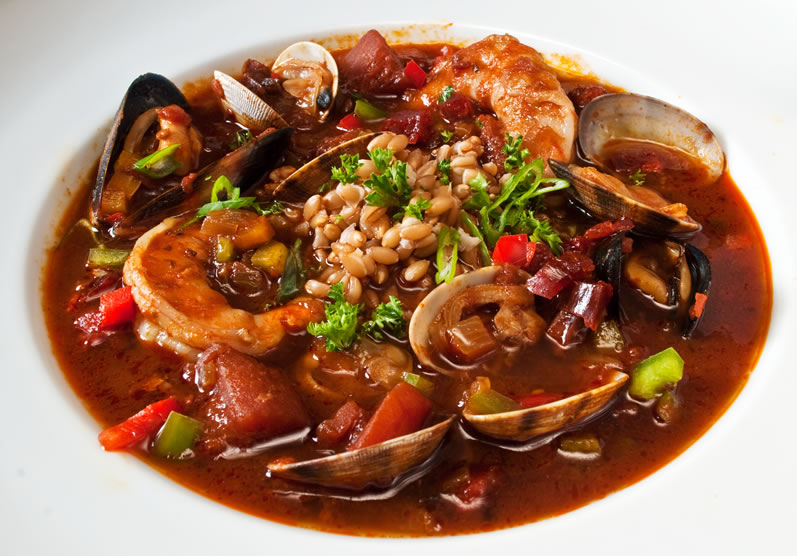 For this hearty soup, I enlivened my more traditional Spanish Zarzuela recipe with smoked paprika, ancho chile paste, and Spanish chorizo. The result is magnifico!

This recipe may read like a lot of work, but I had this soup to the table in under an hour, all prep included. Okay, I had the cooked farro on hand.