I grew up eating spaetzle. But I thought it was pasta.  To be even more specific, I though it was NOODLES. It took a curious turn of events to clear this confusion in my mind. 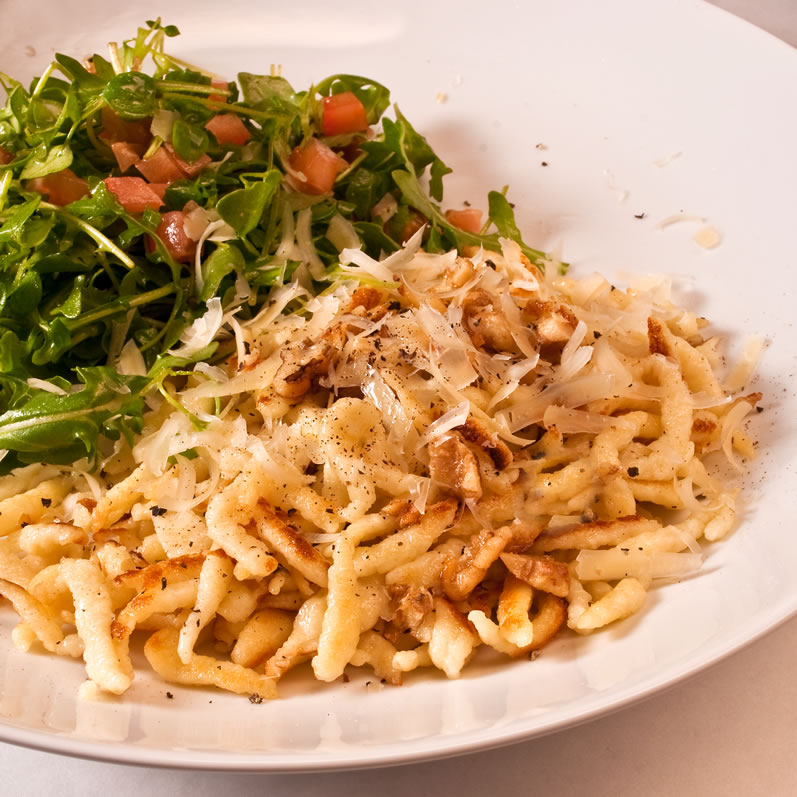 Grandma Mary loaded her Divine Chicken Noodle Soup with these super chewy, squiggly noodles she pushed through a large holed, wire mesh device. They were completely addictive, and I loved them beyond measure.

She later gave me the device, but because I had never actually seen her make these noodles (they were always in the soup when I arrived), I tried for years to push regular pasta dough through the mesh, cursing the whole while.

It was nigh impossible. And the noodles made in this way were tougher than I remembered hers to be. 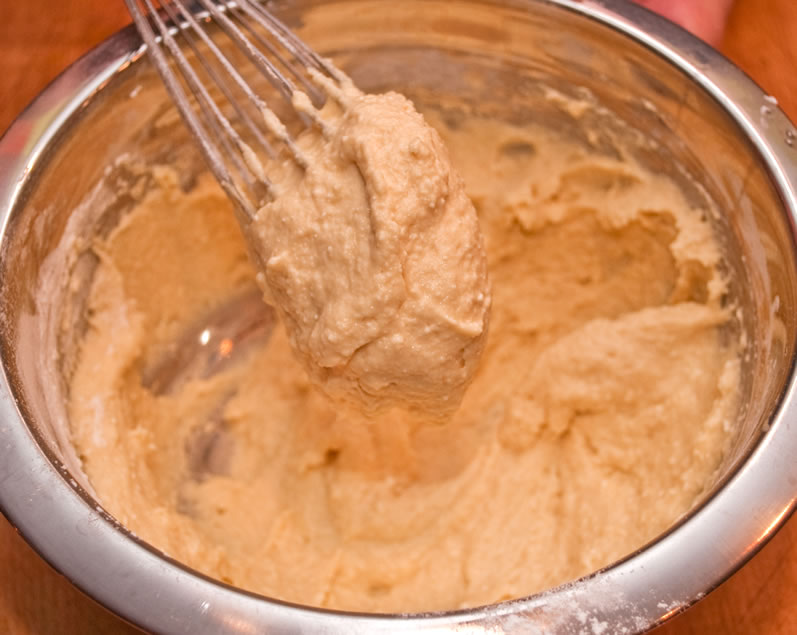 Grandma pronounced her noodles shpet-sle, not spate-sel, a pronunciation I heard later from others. I never connected these very different pronunciations with each other.

This pronunciation snafu is the reason I didn’t associated her noodles with the spaetzle makers I saw in cookware shops. I had no idea she was making spaetzle all those years.

Unfortunately, I neglected to have her show me how to make her famous noodles until it was too late. And after several attempts later to reproduce them, I finally gave up. 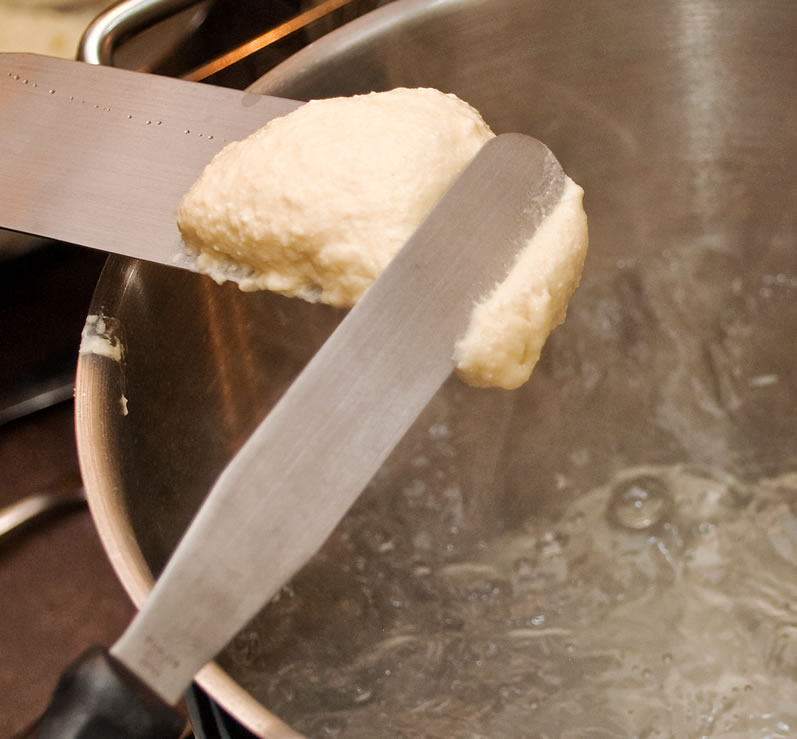 It was a mere fluke that made me want to try making spaetzle myself a few months ago. I had never made it, as the few times we ordered it in traditional German restaurants, the dumplings were doughy and bland (nothing that reminded me of Grandma’s noodles). But now I know that was due to poor technique, rather than to the dish itself.

The recipe that sent me to the kitchen comes from the brilliant chef, Roy Yamaguchi, in his inspired cookbook, Roy’s Fish and Seafood: Recipes from the Pacific Rim. 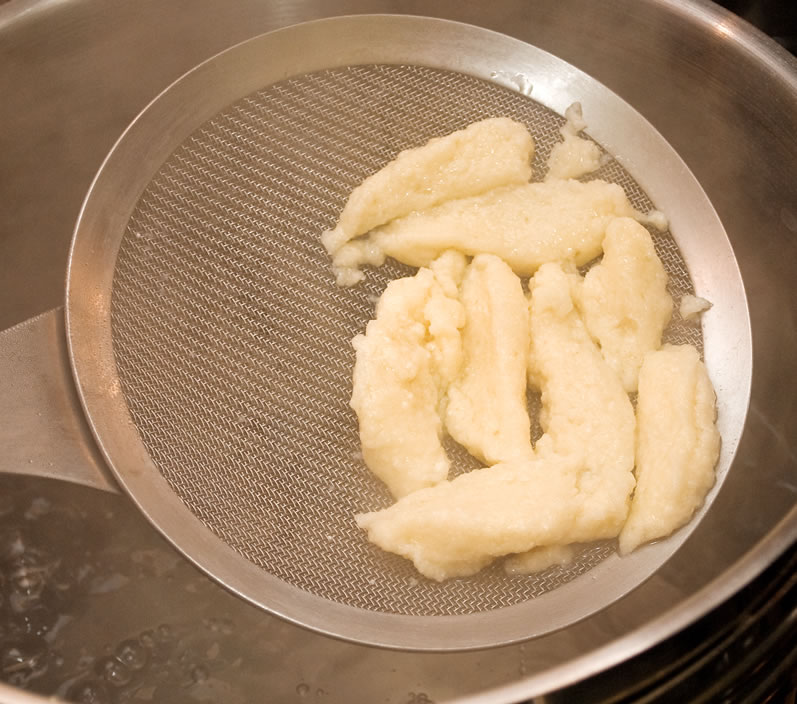 I’ll share with you my riff on Roy’s dish later, but for now just let me say that the spaetzle was a revelation. As I put the first one into my mouth to test for doneness, memories of those years with my German Mennonite grandmother came flooding back. I couldn’t believe it. I was eating her noodles!

Now if this doesn’t count for a miracle, I don’t know what does. Grandma’s noodle recipe is not lost after all. I can hear her laughter in the recesses of my mind. 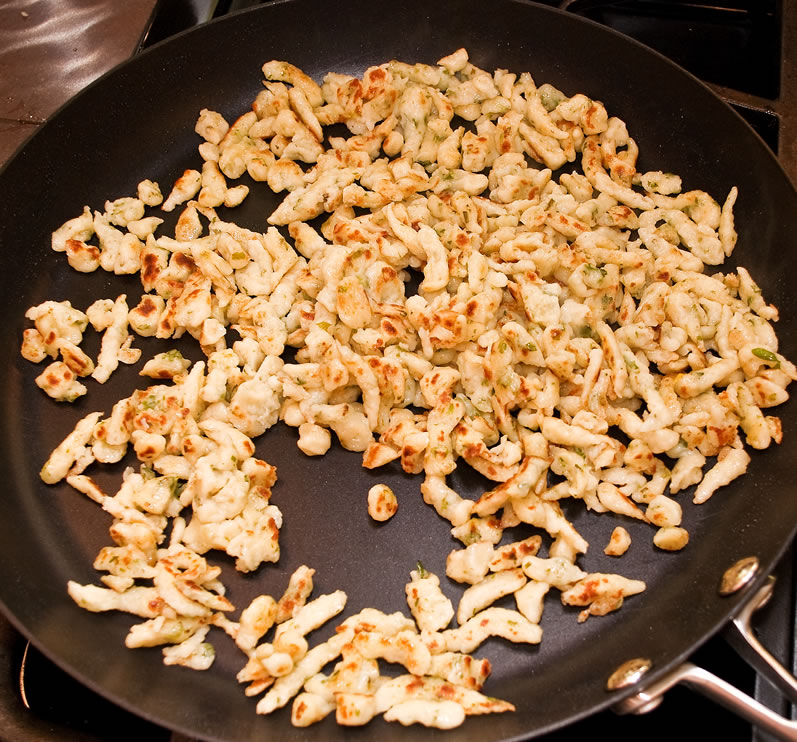 Spaetzle is a cross between pasta and dumplings, with a closer affinity to pasta–but much easier to make. When prepared properly, the pasta-dumplings are light, with a lovely, toothsome chewiness.

The shape is usually small and irregular. You can use a spaetzle maker to push the batter-like dough through a ¼-inch holed plate, or more simply, push off small bits from a spatula into boiling water. I recently used a potato ricer with  1/8-inch holes to very good effect. Of course, using this device, the spaetzle are quite narrow.

The recipe that follows is from the German-Swiss-Austrian-Hungarian tradition; however there is no reason to make only one type of spaetzle or to stay within the traditional boundaries. This simple concept lends itself to endless variation, much like the Italian dumpling, gnocchi. I am still coming up with variations and will share those with you in future posts.

I especially love spaetzle sautéed in a little brown butter with the simple additions of chopped toasted walnuts or hazelnuts and freshly grated parmesan. They also make great soup noodles.

Technique Note   It is virtually impossible to specify exactly how much flour you should use in your spaetzle batter. Flours vary from maker to maker, kitchen to kitchen, and day to day (humidity). For most applications, I prefer a batter that is similar in consistency to a stiff muffin batter. If I want to use the spaetzle as soup noodles, I make the batter even stiffer, which makes a firmer, chewier spaetzle. However, the batter can’t be so stiff that you are no longer able to push it through the holes of your chosen device.